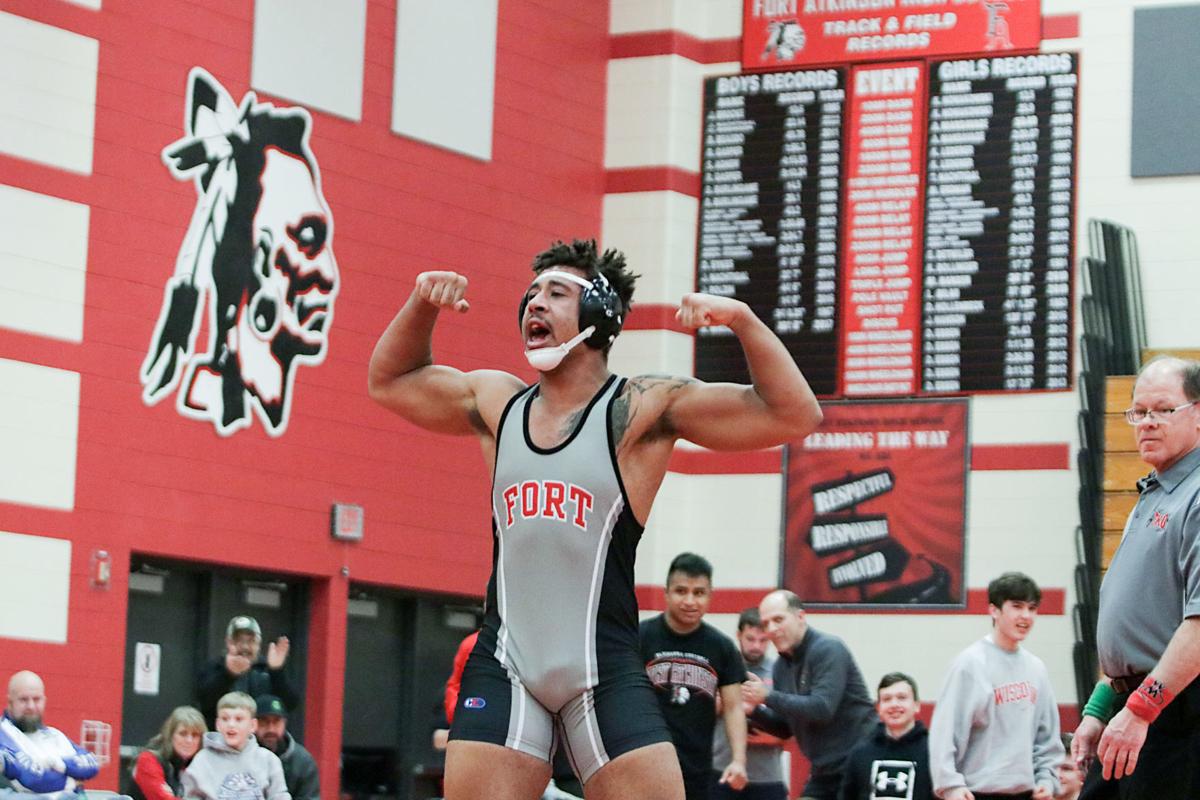 Senior Mika Gutoski celebrates after earning a second-period pin in the 220-pound championship match at the Terry Kramer Open on Saturday in Fort Atkinson High School. 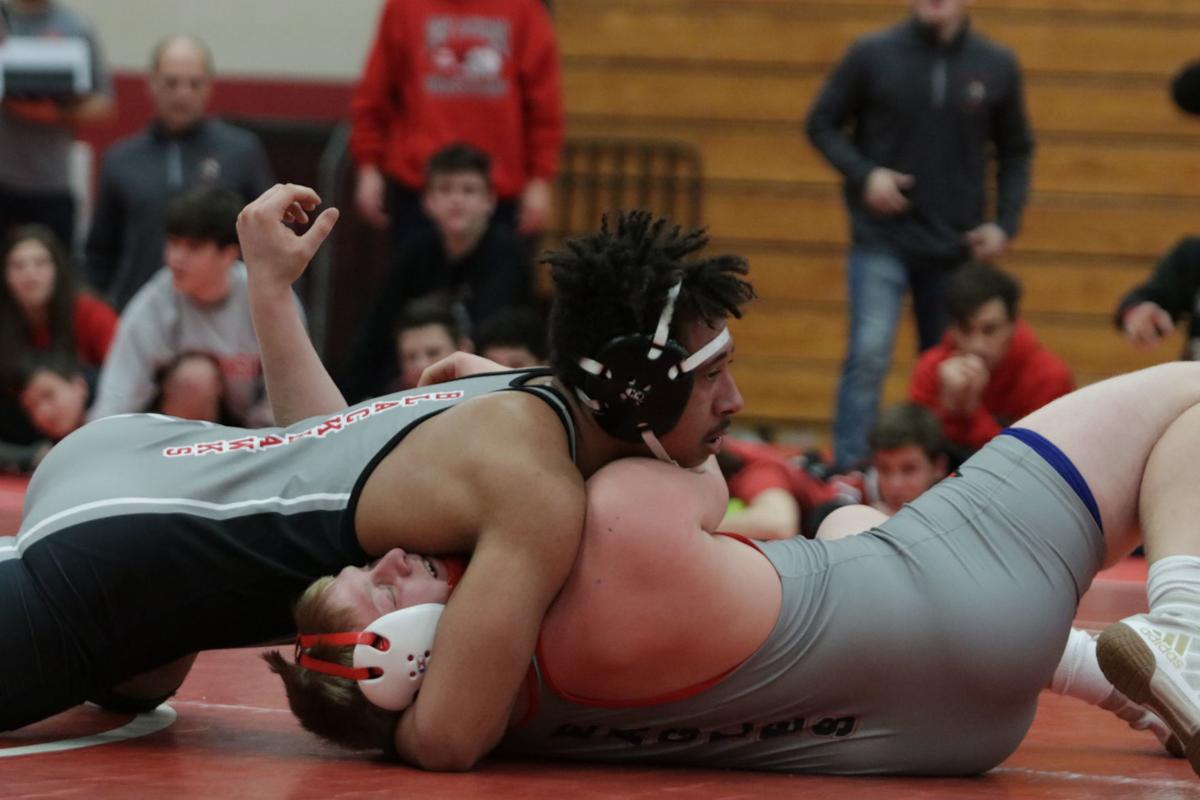 Senior Mika Gutoski finishes off a pin for Fort Atkinson in the 220-pound championship bout at the Terry Kramer Open on Saturday. 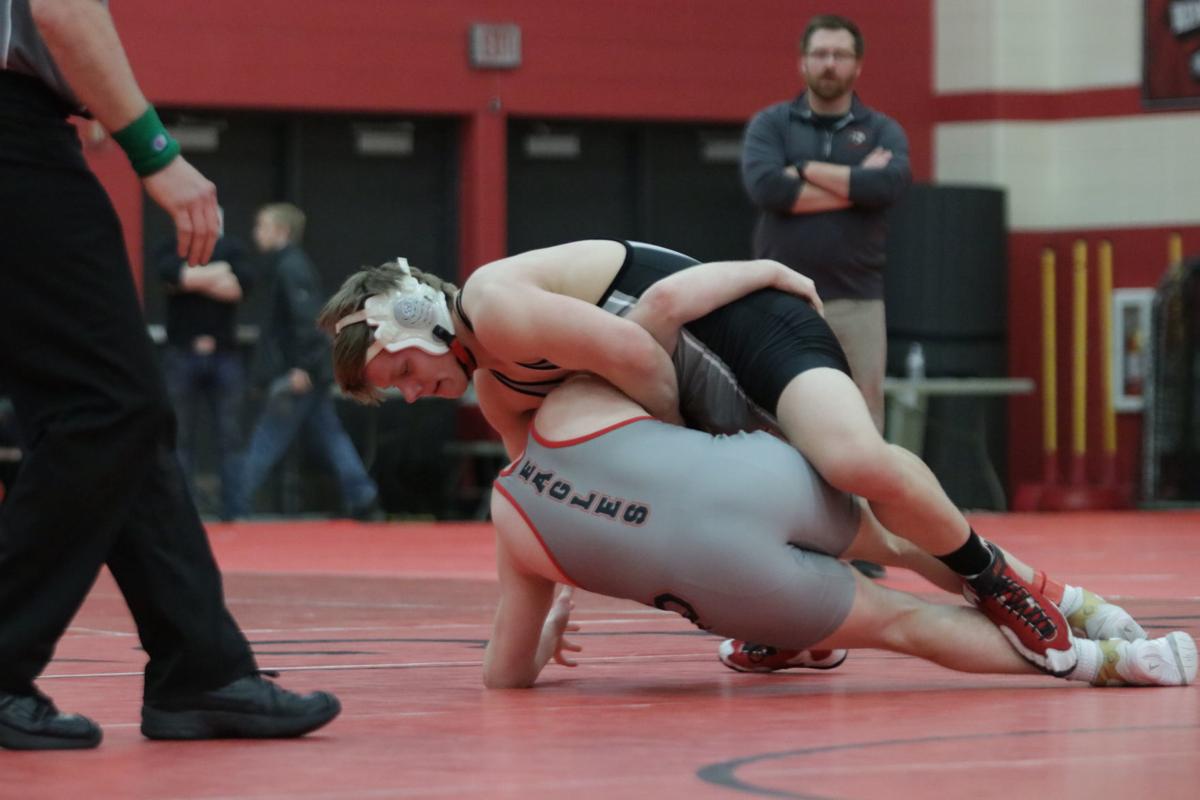 Senior Mika Gutoski celebrates after earning a second-period pin in the 220-pound championship match at the Terry Kramer Open on Saturday in Fort Atkinson High School.

Senior Mika Gutoski finishes off a pin for Fort Atkinson in the 220-pound championship bout at the Terry Kramer Open on Saturday.

Mika Gutoski was the lone Fort Atkinson wrestler to climb the mountain and win the Terry Kramer Open on Saturday and he did it in style.

The 220-pound senior prioritized watching Fort Atkinson junior 182-pounder Thomas Witkins forced to forfeit in the title match because of a persistent bloody lip instead of warming up for his title bout.

Gutoski found inspiration in the fact that Witkins settled for second place at the home tournament for the second consecutive year and turned in a second-period pin to lead Fort Atkinson to a tie for seventh-place with 251 points at the 17-team tournament on Saturday.

Slinger won the meet with 383.5 points for the third year in a row. Sauk Prairie also scored 251 points.

Horvatin sprained a joint in his leg and gave up an injury forfeit in a semifinal match, which ultimately led to a fourth-place finish. Witkins lost in the championship match to Sauk Prairie senior Marcus Hankins. Witkins ran out of injury time as assistant coach Abe Graziano and the training staff attempted to get a cut on his lip to stop bleeding.

“With my practice partners — Thomas, Jacob, Dorian (Burhans, who wrestles at 285 pounds) — the four of us are really close,” Gutoski said. “With Jacob getting hurt, that definitely gave me fuel to come out and push back at Craig a little bit (in the semifinals) and it was the same with Thomas.

“With us being extremely close and tight, they definitely radiate energy. If they do well, I do well. If they do poorly, I know I need to go out and kind of succeed for them.”

“This is what he’s done all year on the mat,” head coach Ryan Gerber said. “The big thing for me was that he was watching Thomas. He was supposed to be warming up, but it was more important to him to watch his teammate. He watches Thomas go down that way and he was a captain and leader. He won it for himself, absolutely, but there was a lot in there for his team and his teammates.”

In the semifinals match, Gutoski showed the inexperience in his wrestling winning the match despite taking a chance experienced wrestlers are ingrained to avoid. Gutoski was in a neutral position early in overtime against Schenk and he opened a hip to encourage Schenk to increase his momentum and leverage. Gutoski knew what he was doing, invited it and turned Schenk’s momentum into a two-point, match-winning takedown.

“I did that last week against a kid who weighed 284 pounds,” Gutoski said. “So I kind of knew that people who want to overpower me are going to attack and if I can get out to the side, I can quickly get out to the side like they do in Spain with the bull. I just get him to the side of me and covered up to get two.”

Gerber has called Gutoski a “cool cat”; a “tough cat”; an “interesting cat”; on Saturday he became a bullfighter.

“There are rookie mistakes, those are going to happen — it is his second year wrestling,” Gerber said. “But then he puts together a match like the championship, where he looks like he’s been wrestling for a long time and it’s exciting. He’s one of these guys where we’ve only had him for two years and it’s hard not to wonder what it would be like if we had him for a full four years. He’s already damn good and to think what he could be with a little bit more experience is scary.”

For Witkins, the loss by injury forfeit to Hankins was the third loss in 12 months to the Sauk Prairie wrestler. Both wrestlers qualified for the WIAA Division 1 individual state meet last year and neither placed. Hankins earned two victories by decision last year — the first was in the 195-pound championship at the TKO and the second was in overtime at the Badger Conference meet.

Witkins had a chance to lock up a leg ride on Haskins early in the second period after the first stoppage, but he couldn’t get it locked in. Shortly thereafter, the blood started to leak out of the bandage and the clock ran out with Witkins down one point in the second period.

“It’s not like he’s gotten pinned and beaten by five or six points,” Gerber said. “When you have a one- or two-point match whether you win or lose, there’s something in the match that could have changed it. He’s been right there. We haven’t been outclassed, we just come out on the wrong side of a close match.

“We’ll find out real quick at conference when we see that kid again in two weeks. I’m not concerned about it. My only concern right now with Thomas is to get some carmex or chapstick to go on a strict regimen for that lip.”

Worden lost both of his championship bracket matches to settle for fourth place. Three Blackhawks — Burhans as well as seniors Sawyer Brandenburg (120) and Tristin Trevino — took seventh place in their respective weight classes.

“I look at this tournament a little bit differently than I did a few years ago,” Gerber said. “This is a tournament to get us ready for regionals and sectionals. I think we wrestle some really good competition. Do I think we could have wrestled better in key matches? Yes. But at the end of the day, this varsity team got a lot better today in preparing for conference — which is one of the best in the state — and better for regionals and sectionals in three weeks than they were before today.”

Jefferson continues to deal with tragedy

On Saturday, 17 wrestling teams will compete at the 10th annual Terry Kramer Open hosted by the Fort Atkinson Blackhawks.