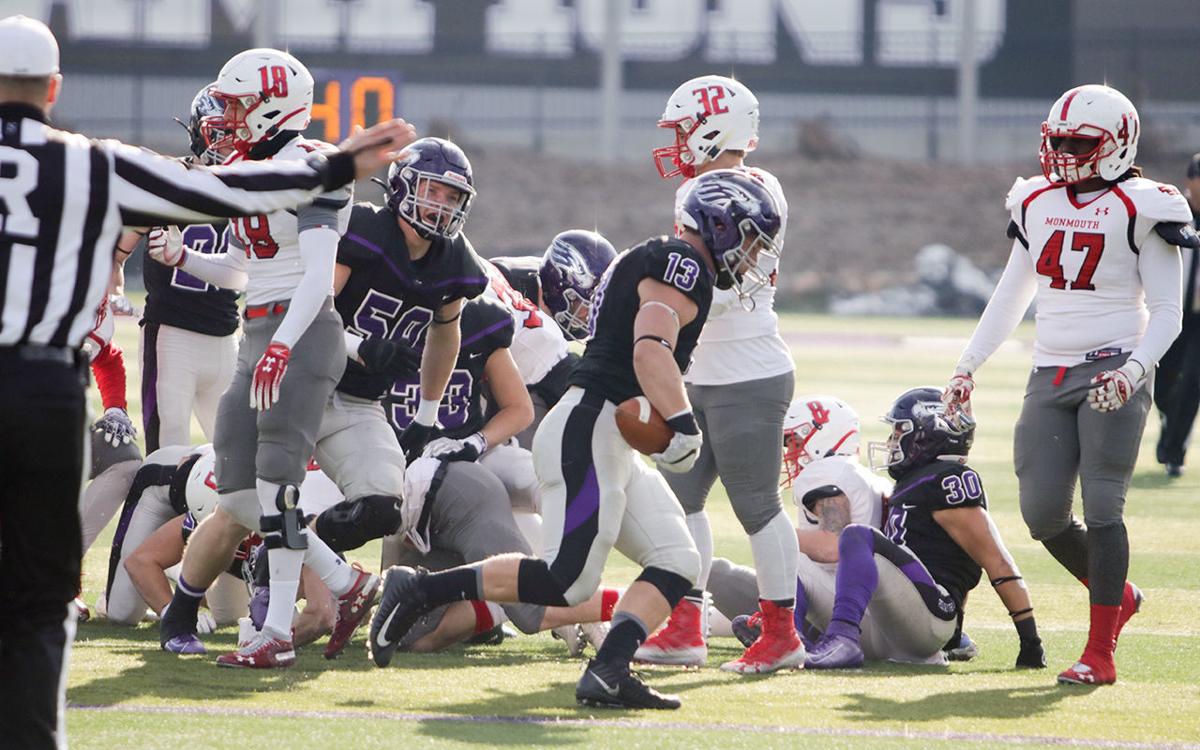 Kaleb Kaminski emerges from a pile with the football after stripping a Monmouth College kick returner in the first quarter. UW-Whitewater scored to take a 14-0 lead on the next play and went on to earn a 35-10 victory in an NCAA Division III football game at Perkins Stadium on Saturday. 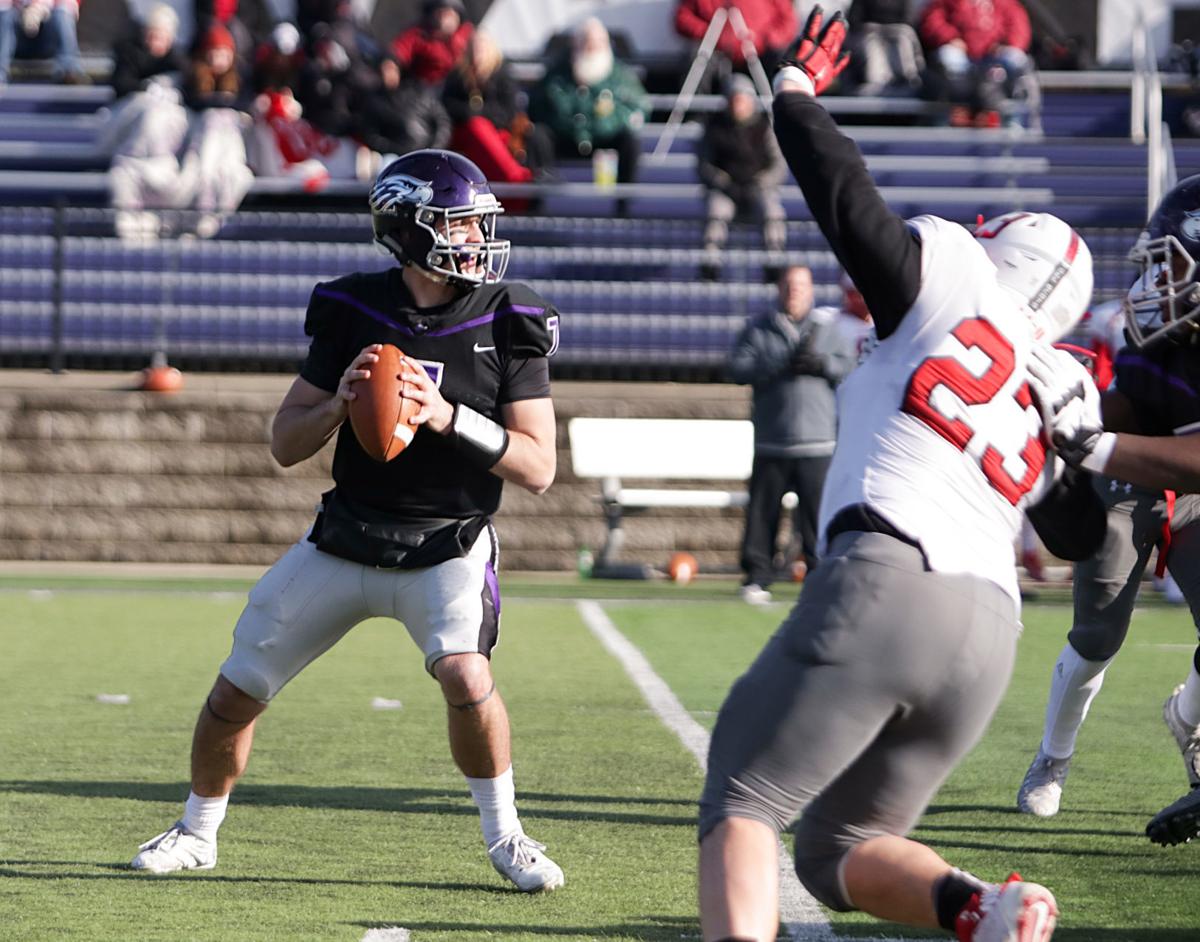 Max Meylor sets up in the pocket with his familiar laceless grip on the football. Meylor threw four touchdown passes on Saturday as the UW-Whitewater Warhawks earned a 35-10 victory over Monmouth College on Saturday.

Kaleb Kaminski emerges from a pile with the football after stripping a Monmouth College kick returner in the first quarter. UW-Whitewater scored to take a 14-0 lead on the next play and went on to earn a 35-10 victory in an NCAA Division III football game at Perkins Stadium on Saturday.

Max Meylor sets up in the pocket with his familiar laceless grip on the football. Meylor threw four touchdown passes on Saturday as the UW-Whitewater Warhawks earned a 35-10 victory over Monmouth College on Saturday.

WHITEWATER — It doesn’t take an overly observant person to hear it.

“Rip the ball out baby,” UW-Whitewater coach Kevin Bullis yells on the sidelines as each play is concluding.

That’s exactly what Kaleb Kaminski did on a kick off in the first quarter.

The University of Wisconsin-Whitewater had scored a touchdown on the previous play and the junior linebacker ripped the ball away from the kick returner and gave the Warhawks a chance to score again deep in Monmouth territory.

Quarterback Max Meylor completed a screen pass to Alex Peete on the next play and the Warhawks never looked back as they rolled to a 35-10 victory against Monmouth College in the first round of the NCAA Division III playoffs on Saturday at Perkins Stadium.

“When you get a takeaway on a kick off, that’s beautiful,” said Bullis, who is in his fifth year as the head coach at UW-Whitewater. “We talked about it all week that we thought they had some vulnerabilities with ball security. To be able to get that out and keep the momentum going is ultimately what it is. Not giving their offense an opportunity to establish anything, which is important because you’ll find that most offenses excel in the second half because they’re figuring out what the defense is doing and how the defense is doing it.”

Kaminski and the other Warhawks are used to it, but it doesn’t mean they don’t draw humor from the fifth-year head coach repeating the phrase every opportunity he gets.

“Definitely when the plays stop and he’s the only one still yelling,” senior safety Nate Tranel said. “It’s definitely something that gets us excited. We want to get the ball on the ground as a defensive mindset. When they have the ball in their hands, that’s what we’re going for. We’re trying to rip it out every chance we can.

“It puts an extra reminder in our heads to go for the ball.”

Bullis indicated that the Warhawks specifically saw fumbles as an area of emphasis with the Fighting Scots, which went 7-2 in the regular season and won the Midwest Conference title. On the other sideline, Monmouth head coach Chad Braun identified UW-Whitewater’s punt protection as a spot Monmouth could apply pressure and give themselves a better chance to pull off the upset.

“A lot of our guys take pride in getting after opponents punters,” Braun said. “We did see some things on film that we could take advantage of, but we didn’t get them to punt it enough.

“We practiced it all week and they did a great job executing it today.”

On Monday, the UW-Whitewater coaching staff decided that it was going to go with Meylor instead of junior quarterback Zach Oles, who started all 10 regular season games. Meylor relieved Oles because of an injury in Week 3 and relieved Oles in Weeks 9 and 10 due to poor performance.

The Warhawks punted on their first drive of the game, but scored on all four of their next possessions in the first half.

“Max has earned that opportunity, there’s no doubt,” Bullis said. “He throws a nice ball. There were opportunities where he made mistakes on his reads, but the beauty is that he learned from his corrections that Coach (Peter) Jennings gave him.”

Part of the maturation process for Meylor is not necessarily his ability to move within the pocket, but the directions that he decides to move in the pocket. When faced with pressure, his instinct is to move deeper and try to get out around the edge. One of Oles’ strengths is to feel the pocket collapsing around him and he steps up and puts his shoulders down to get two or three yards, or minimally, to get back to the line of scrimmage.

In the second half, the Fighting Scots started bringing a variety of blitzes. Braun said he was calling blitzes that they hadn’t run in years.

“The pocket was good, except when they’d bring two guys or maybe three: I got a little antsy at times,” Meylor said. “I have to know my throws when they do bring blitzes.”

For the most part, the offensive line with Ethan Kee directing traffic from the center position, was able to set a manageable pocket.

“It’s nice knowing you have some big nasty guys up front for you,” Meylor said. “They don’t say much, actually. They’re always urging you to make your throws, so I like that. They want me to stay in the pocket at all time.”

Meylor regularly throws without the laces. Only once did the ball unravel and tumble out of his hand as he threw on the run to his right and never had a chance to get down field to the receiver.

On his touchdown passes to Wisniewski, Peete and Kumerow, the former Mount Horeb athlete threw them with the comfort of the other side of the football — the non-laces side.

“Freshman year of high school, my coach taught me to grab it and rip it,” Meylor said. “Half the time, I don’t even use laces. … I’m not sure. I actually throw a worse ball with laces. It comes off right when I just have the grooves of the stripes. It feels a lot better and it comes out a lot smoother too.”

Meylor said if he gets the snap and has the laces, he’ll switch to the back side.

“I’m a believer that there are a thousand ways to skin a cat, he just chooses one of those ways that makes my skin crawl,” said Jennings, who doubles as the quarterbacks coach and offensive coordinator. “There are many very successful QBs who choose to throw it as they get it. He is just one of those guys.

“I have coached guys like that before and at the end of the day, I want those guys to be comfortable.”