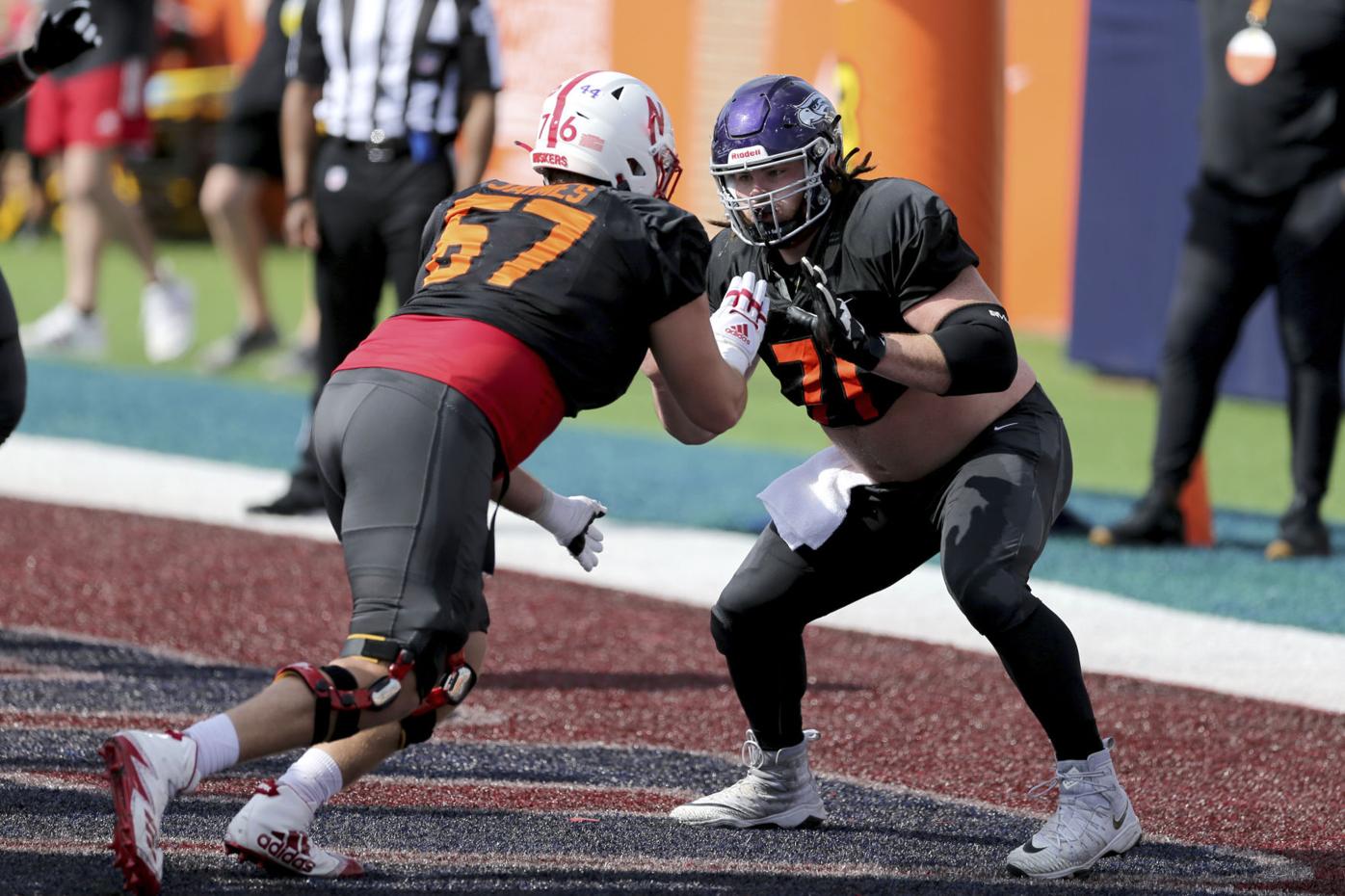 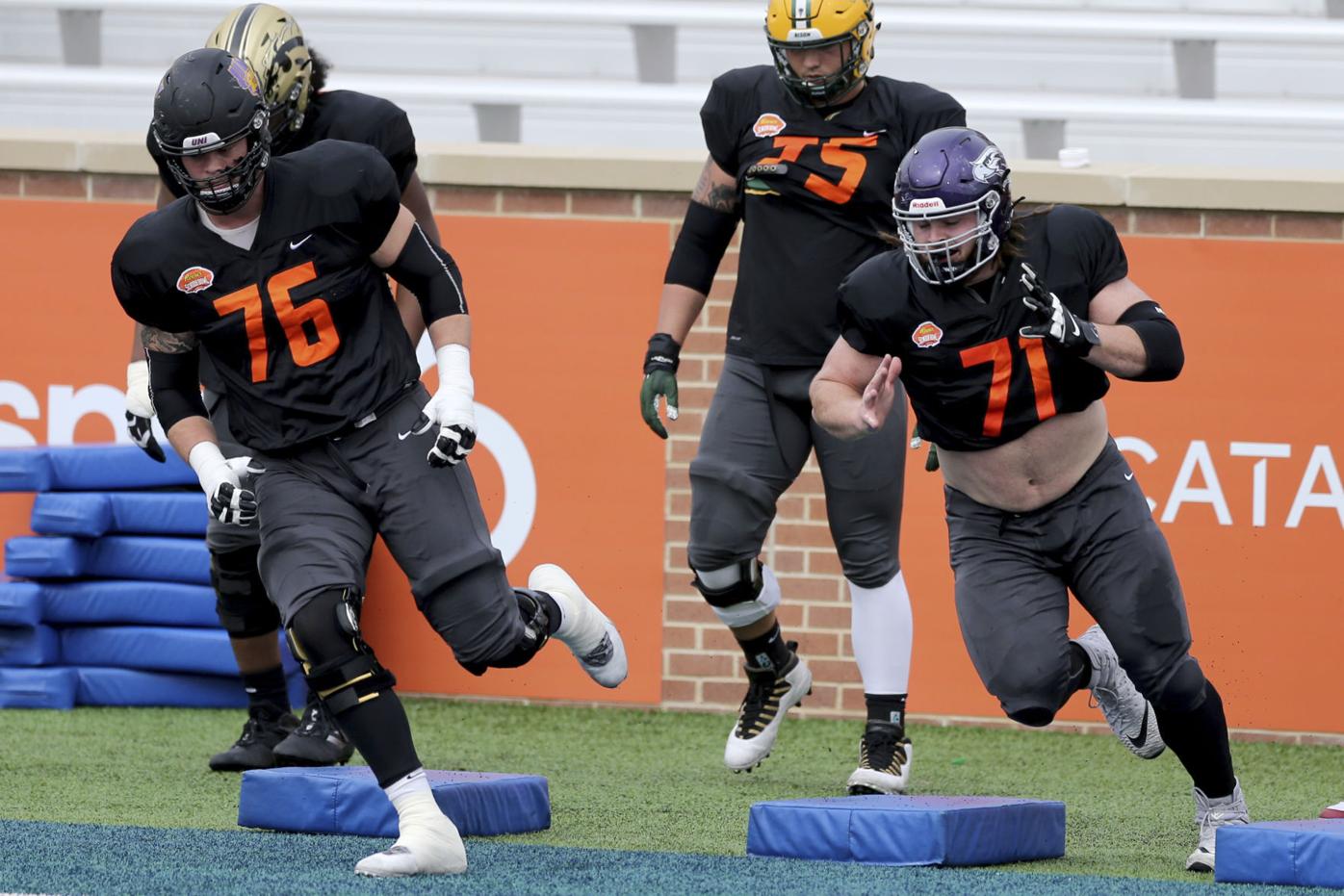 Spencer Brown of Northern Iowa (FCS) (76) and offensive lineman Quinn Meinerz of Wisconsin–Whitewater (DIII) (71) run a drill during the National team practice for the NCAA college Senior Bowl in Mobile, Ala., Wednesday, Jan. 27, 2021.

Spencer Brown of Northern Iowa (FCS) (76) and offensive lineman Quinn Meinerz of Wisconsin–Whitewater (DIII) (71) run a drill during the National team practice for the NCAA college Senior Bowl in Mobile, Ala., Wednesday, Jan. 27, 2021.

The UW-Whitewater offensive lineman was invited to the Reese’s Senior Bowl — which will be played Saturday in Mobile, Alabama — but has already started making a name for himself in practices.

Meinerz is the lone Division III prospect at the event, but it’s not stopping him from standing out among college football’s best.

“You may get one or two Division III players drafted each year, he’s (Meinerz) going to be one of them,” said ESPN’s draft analyst Todd McShay during a television interview Wednesday.

“It’s so special. It shows what he’s been able to do.”

Meinerz — who calls nearby Hartford his hometown — was an AP first team All-American his junior season with the Warhawks. He helped UW-Whitewater reach the Division III National Championship game in 2019.

McShay has Meinerz as his 12th-ranked offensive guard in the upcoming NFL Draft, which will take place April 29 to May 1. Meinerz’s overall draft ranking from McShay is 189th in the 256-pick draft.

Meinerz’s projection could change though.

It wouldn’t be unprecedented for Meinerz to make it to the NFL. Milton native and former UW-Whitewater offensive lineman Nate Trewyn went undrafted, but ended up playing for the Tampa Bay Buccaneers in 2019 and the Los Angeles Rams in 2020.

Former Warhawk wide receiver Jake Kumerow also has found a few stints in the NFL — including one with the Green Bay Packers from 2017-2019.

“Another pancake, just collapsing his side of the line of scrimmage for that run,” said NFL Network analyst Daniel Jeremiah during the clip. “Look, this is kind of getting borderline ridiculous what he’s doing up front this week.”

Although Meinerz’s play is garnering national attention from NFL analysts, it’s the aesthetic of the former Warhawk that may be the favorite talking point of the media.

And for good reason.

The 6-foot-3-inch, 320-pound offensive lineman — who has hair down to his shoulders and wears his jersey up to the middle of his stomach — has been endearingly referred to as a ‘mountain man’ by some.

It makes sense for the player who spends offseasons up in Canada tackling trees.

In an NFL Network interview, Meinerz was asked, what’s better: Pancaking a tree or pancaking a defensive lineman?

“Definitely have to say a defensive lineman,” Meinerz said with a chuckle. “Hitting wood isn’t the most fun thing to do, but it’s what I had up there.”

Meinerz never got a senior season with the Warhawks after the COVID-19 pandemic wiped away the 2020 schedule.

“I had to control what I can control,” Meinerz said. “That was training a lot, lifting a lot of weights and getting my body composition better. When gyms opened up that was all I was doing.

“I understood to play at the next level I have to be more versatile and I can’t just play guard so I decided to learn center on my own.”

Meinerz may be dominating on film, but he assured everyone going up against some of best in Division I isn’t as easy as it seems.

“On film to you guys I’m sure it looks a lot easier,” he said during the NFL Network interview. “I’m just playing football, doing kind of what I do. I’ve been working really hard for a really long time.”

The hard work seems like it’s about to pay off at the NFL Draft.