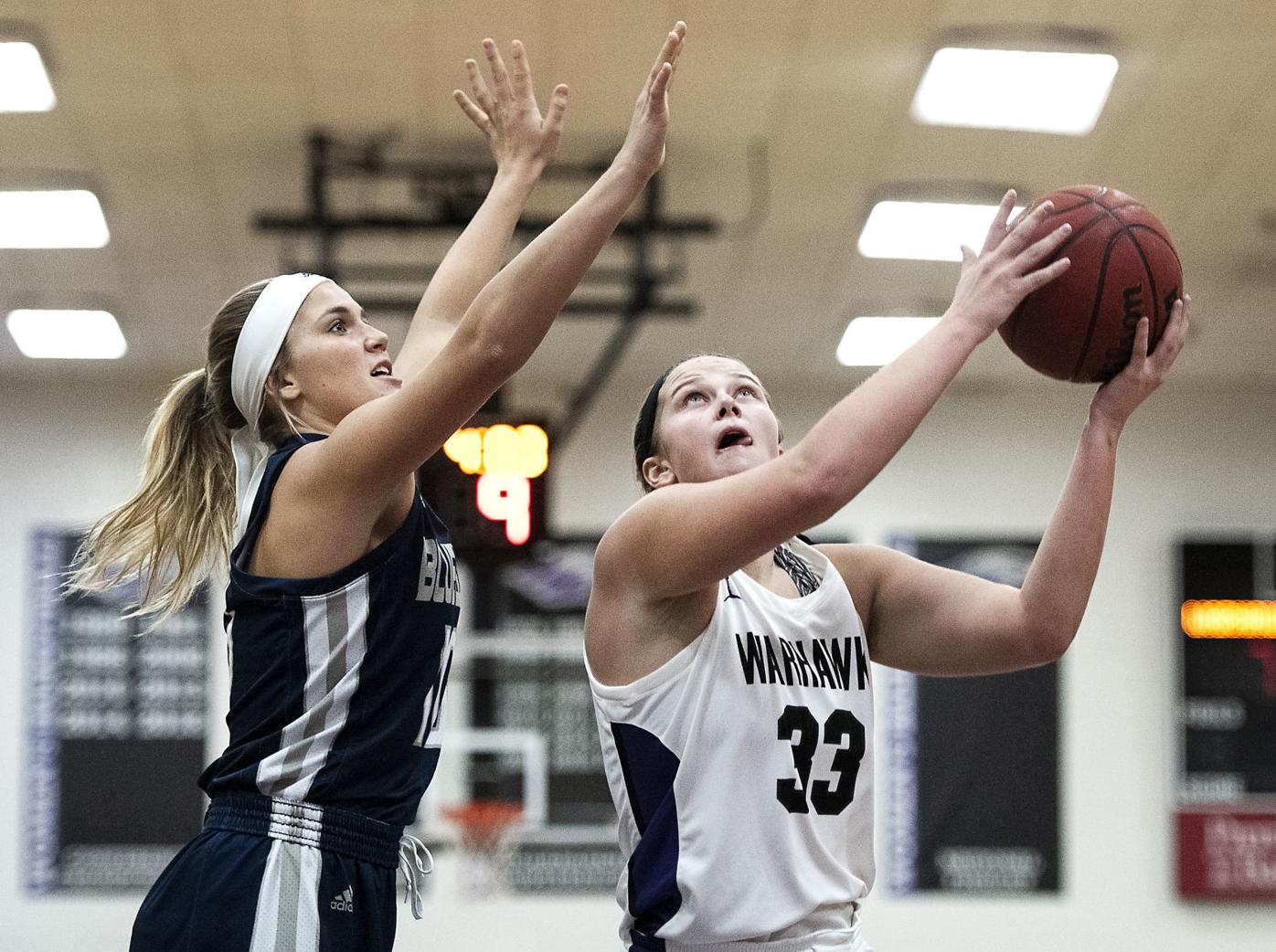 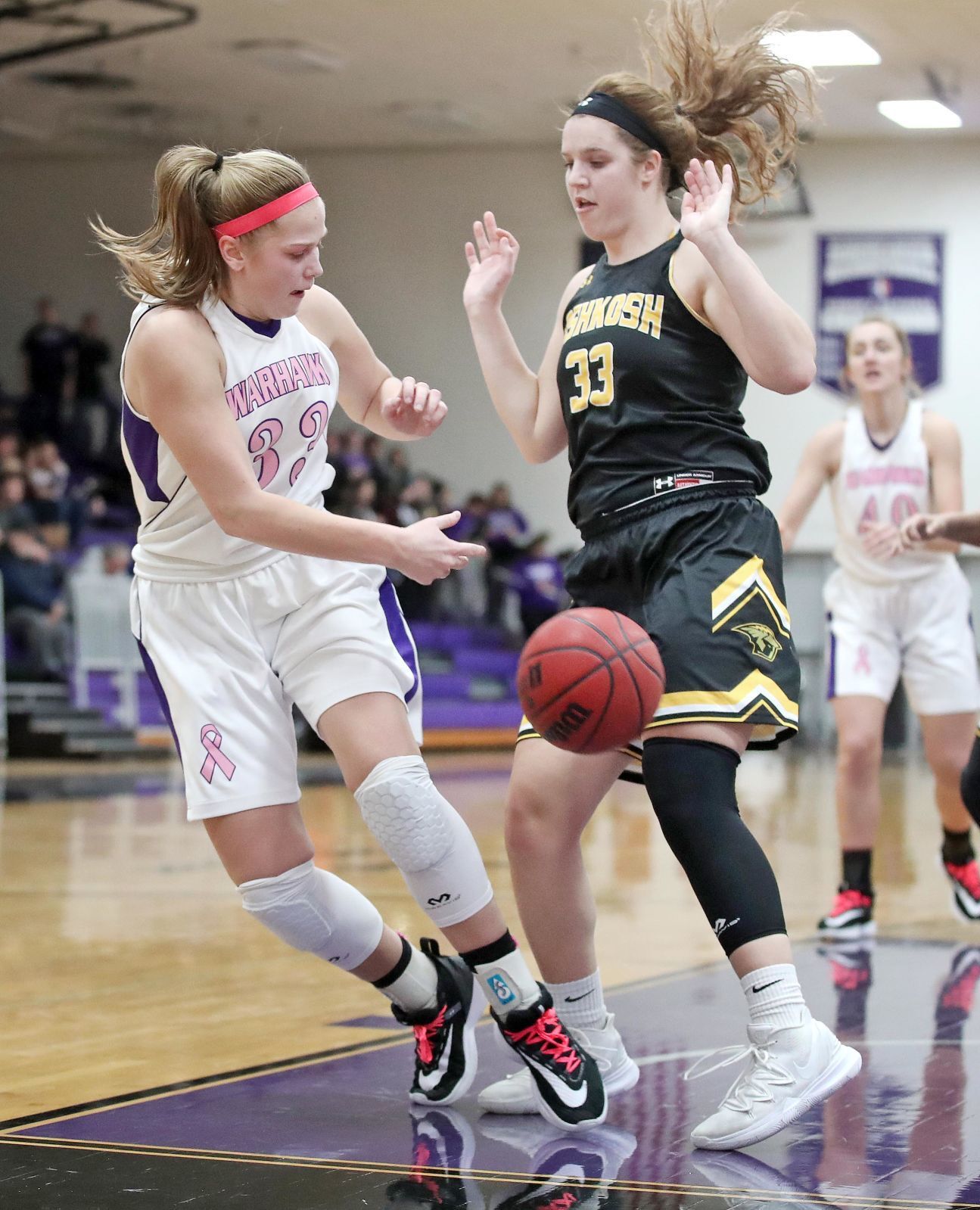 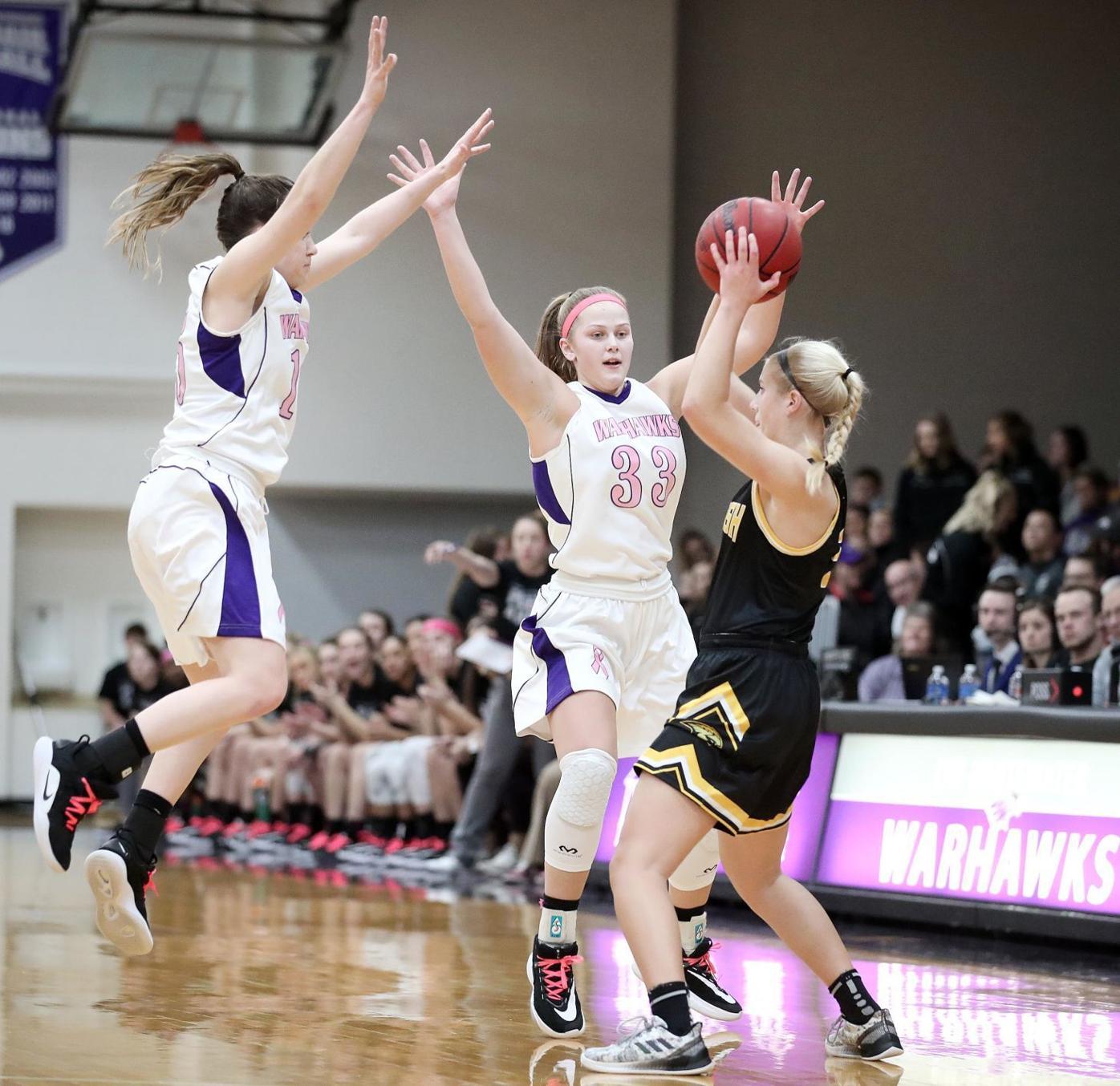 UW-Whitewater’s Veronica Kieres, left, and Aleah Grundahl both try to stop UW-Oshkosh’s Brooke Frietag from making a pass during their regular season game in Whitewater on Wednesday, Feb. 19.

UW-Whitewater’s Veronica Kieres, left, and Aleah Grundahl both try to stop UW-Oshkosh’s Brooke Frietag from making a pass during their regular season game in Whitewater on Wednesday, Feb. 19.

Aleah Grundahl and her teammates spent months wondering if they would play a basketball game this season.

Sports everywhere had changed amid the COVID-19 pandemic, and no games had been played on the UW-Whitewater campus since the March shutdown.

So what did the Warhawks women’s basketball players do when they convened in September?

They went all-in with goals to stay healthy and get better on the basketball court, whether they ever got to play a game or not.

“Our coaches really got on us about, if we want to be good in the future … it needed to be this year since we were going to have all these practices,” said Grundahl, a sophomore forward. “Our captains were very good at engraving in our heads that we needed to make smart decisions.

“We had a lot of offseason, and our team took advantage by getting better individually and as a team.”

Half a year later, Grundahl the Warhawks are taking advantage of the effort and sacrifices they have made.

And Grundahl, a DeForest High graduate, was named the WIAC Athlete of the Week in women’s basketball Tuesday.

“We started a little slow the first couple games,” Grundahl said. “We knew we weren’t playing as good as we can, with only losing two seniors last year … and our freshman class being very talented.

“We just knew we had to get things together … and now we’ve eventually got to where we want to be.”

Grundahl averaged 23.5 points, 7.5 rebounds and 2.0 steals per game in the Warhawks sweep of UW-Platteville last Wednesday and Friday. She scored a career-high 25 points, including eight of the team’s 10 in overtime, and added 10 rebounds in a 71-68 victory Wednesday. And Grundahl added 22 points, including going 10 of 10 from the free-throw line, in a 64-53 win Friday.

“Our team loves to run the floor, loves the defensive side of things,” said Grundahl, who was named honorable mention all-conference and the league’s Newcomer of the Year last season when she averaged a little more than 10 points and five rebounds a game. “We focus on getting defensive stops, and our main goal is then to sprint the floor. We don’t really like to slow the game down. But if we do get slowed down, we always say get it in the post first.”

This week’s games against Stout will wrap up the regular season, with the WIAC planning a conference tournament that starts Monday.

“It definitely is going to be the biggest deal this season, just because we don’t have an NCAA Tournament,” Grundahl said. “So our tournament determines the conference championship and the tournament championship. We’ve just been starting to finally get our offense and defense working together. We’re hoping that carries over into tournament play.”

The Warhawks are simply grateful to be thinking about any tournament at all.

Folks on the outside might look at a schedule that includes just 8-11 games and ask, “What’s the big deal?”

But “it is a big deal,” Grundahl said. “We (the Warhawks players) had been playing against each other in practice for three months. To be able to play against anyone else was going to be the best thing ever.

“To know we’d have someone on our schedule besides ourselves really got us going.”

It also felt like a reward to the Warhawks, They had not only pushed through those months of practice and life during a pandemic hoping to improve their basketball kills, but they did so, Grundahl said, without a single player testing positive for the coronavirus.

“Our coaches just really put it in our heads that what our choices are this season is what will let us have a season,” Grundahl said. “They just said to be smart with our decisions, maybe not go home as often. We’ve definitely had to sacrifice a lot of things and not be able to see people we want to see just to have our season.

“Our team is fortunate that we didn’t have any problems with COVID, so we’ve been able to practice and be in the weight room since September. There were a lot of teams on campus here that weren’t able to do that.

“But we really decided to make smart decisions and stick together and get better.”

Now Grundahl and the Warhawks are hoping to continue seeing that pay off over the next two weeks.