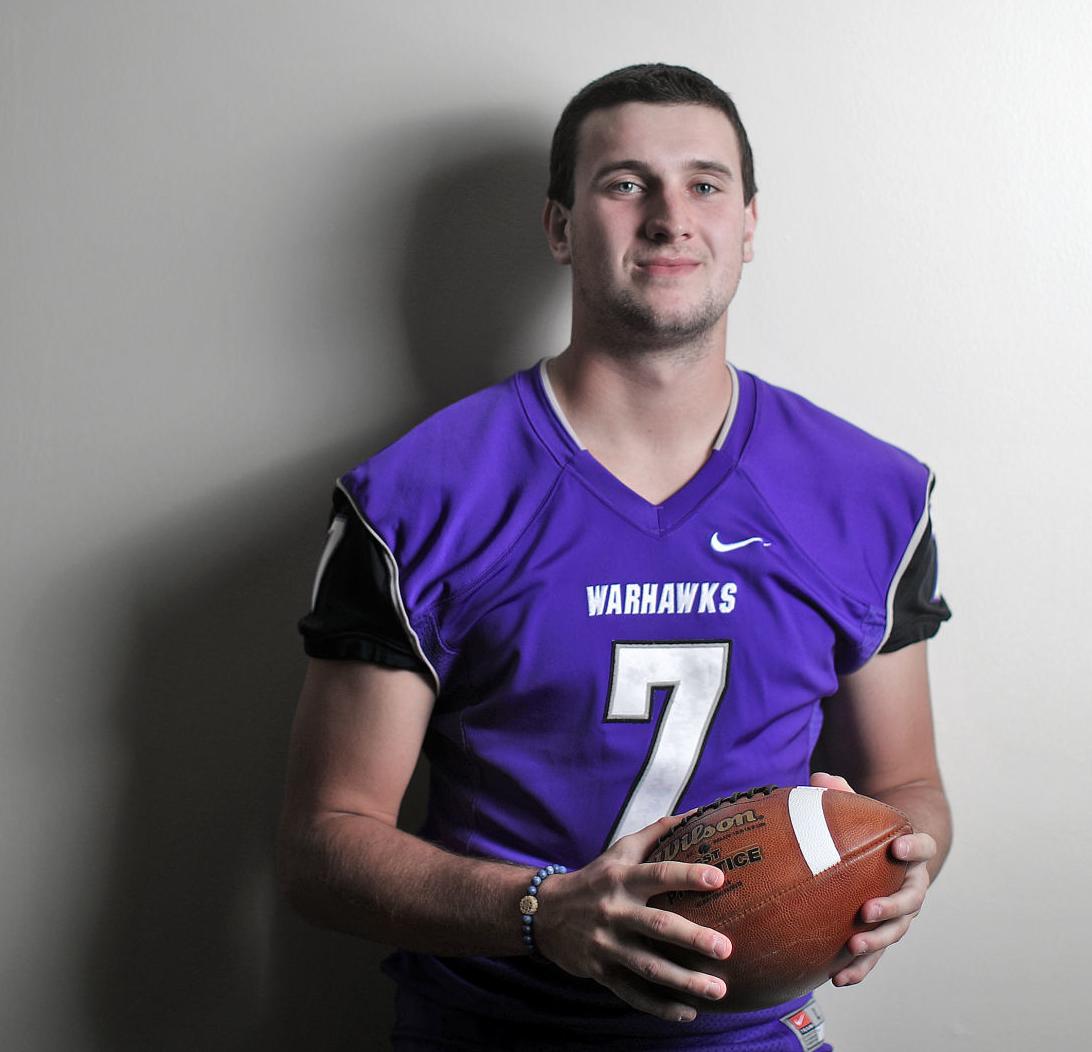 Sophomore redshirt Max Meylor (7) and junior redshirt Zach Oles (5) have been pitted in a quarterback competition with each other this fall, not against each other. 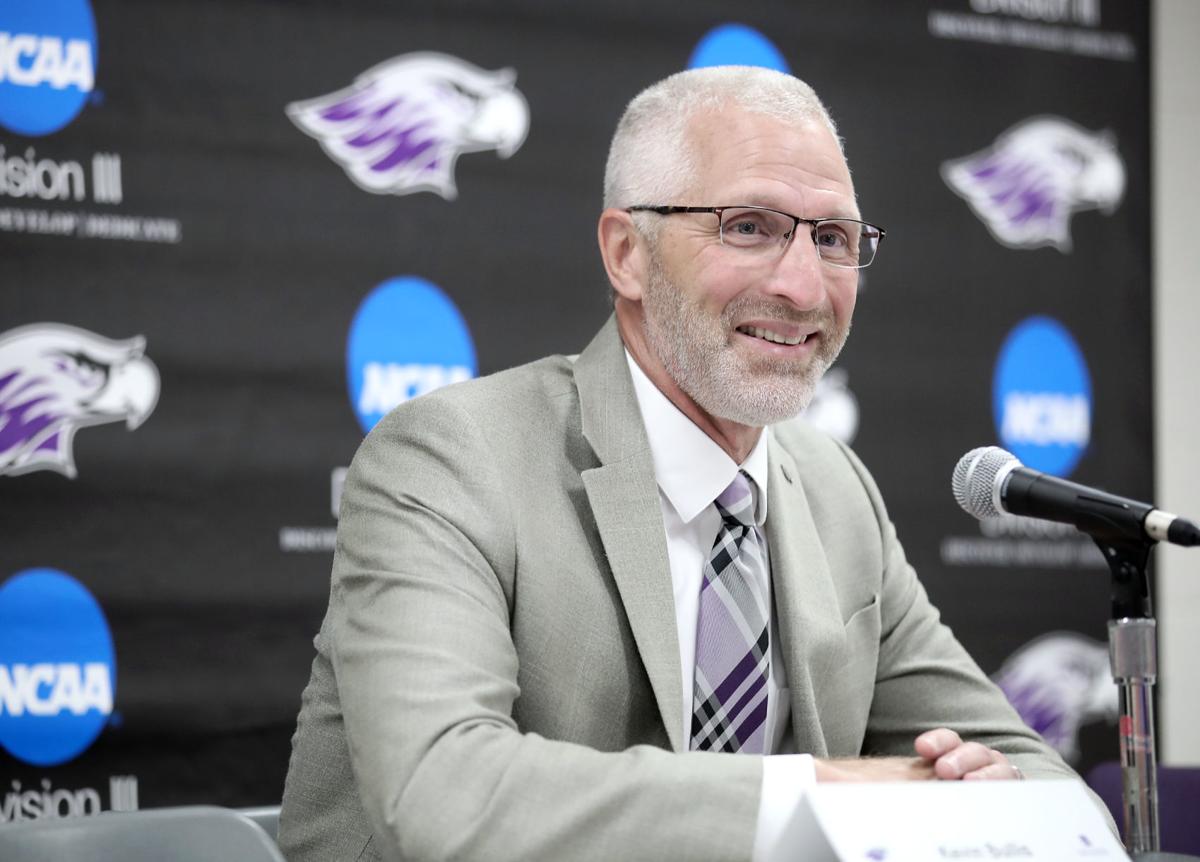 University of Wisconsin-Whitewater football head coach Kevin Bullis takes questions from reporters during the team’s media day event on Wednesday, Aug. 28. Bullis is entering his fifth year as the head coach of the Warhawks.

Sophomore redshirt Max Meylor (7) and junior redshirt Zach Oles (5) have been pitted in a quarterback competition with each other this fall, not against each other.

University of Wisconsin-Whitewater football head coach Kevin Bullis takes questions from reporters during the team’s media day event on Wednesday, Aug. 28. Bullis is entering his fifth year as the head coach of the Warhawks.

CHICAGO — The third-ranked University of Wisconsin-Whitewater trounced Dubuque, used the passing game to double-up Concordia-Moorhead and again leaned on its passing game to get past St. Xavier, the fifth-ranked NAIA team in the nation.

Three passes from Max Meylor stood out and gave the Warhawks the advantage it needed to earn a 28-20 victory over St. Xavier in non-conference college football at Bruce R. Deaton Field in Chicago on Saturday.

Junior Derek Kumerow caught a 19-yard touchdown pass from Meylor on 4th-and-9 as he twisted and fell inside the pylon to give the Warhawks the final score of the game with 25 seconds left in the game. Leading by one point, the touchdown essentially gave the Warhawks enough room for error to survive for the win.

“We pride ourselves on being fast, physical and disciplined. It’s our identity,” said Kevin Bullis on the WFAW postgame show in an interview with Don Wadewitz on Saturday. “We say it, we live it, we believe in it and our kids played that way today.

“That’s what I said to the guys on Monday in the first meeting and I said to them again at halftime, the discipline to do what you have to do and the team that bounces back from their own mistakes is going to be the key thing.”

Bouncing back from mistakes was especially key for sophomore wide receiver Tyler Holte, who fumbled on a kick return in the second quarter setting up St. Xavier with the ball on the UW-W 32-yard line. The Cougars settled for a field goal and a 13-7 lead with 3 minutes, 45 seconds to play in the second quarter.

Holte made up for the fumble when he caught a 29-yard pass from Meylor with one hand in the middle of three St. Xavier defenders. Holte came down on the one-yard line and junior running back Alex Peete leaped over the linemen into the end zone to give the Warhawks a 14-13 lead with 43 seconds to play in the half.

“That’s the type of guy Tyler is. He doesn’t let it bother him,” Bullis said. “That’s what I was talking about, if you mess up and make a mistake. Forget about it. Move on. That’s history. It’s an opportunity to learn from it, but don’t hang on to it.”

The passing game was a necessity as UW-Whitewater ran the ball 48 times for 79 yards. The lack of a rushing game put the Warhawks in several poor spots to convert on third down. The offense converted 7 of its 17 tries on third down and 1 of its 3 tries on fourth down.

The first of the three crucial pass completions by Meylor was a spot-route run by JT Parish, a former Cambridge athlete. Parish caught the pass around the 6-yard line and carried a couple of defenders to the St. Xavier 1-yard line. Meylor rushed the UW-Whitewater offense to the line and Ronny Ponick jammed a run up in the middle to take a 7-3 lead with 10:18 to play in the second quarter.

Meylor took over at quarterback after Zach Oles, who appeared to come out ahead in a head-to-head quarterback competition last week in a 20-10 victory over Concordia-Moorhead. Oles threw all of the passes last week. Meylor threw all except for one this week.

“We talk about discipline and guys staying disciplined to what we do: Max jumped in there without batting an eye, no one else batted an eye and it’s the next man up,” Bullis said. “Max did a fantastic job to take all of those snaps in a nail-biter like that with all that stress is impressive. We’ll learn more about Zach as time goes along.”

The extent of the injury to Oles was unknown immediately after the game. The Warhawks have a week off before beginning the WIAC slate with UW-Eau Claire at home on Saturday, October 5, at 2 p.m. in Perkins Stadium.