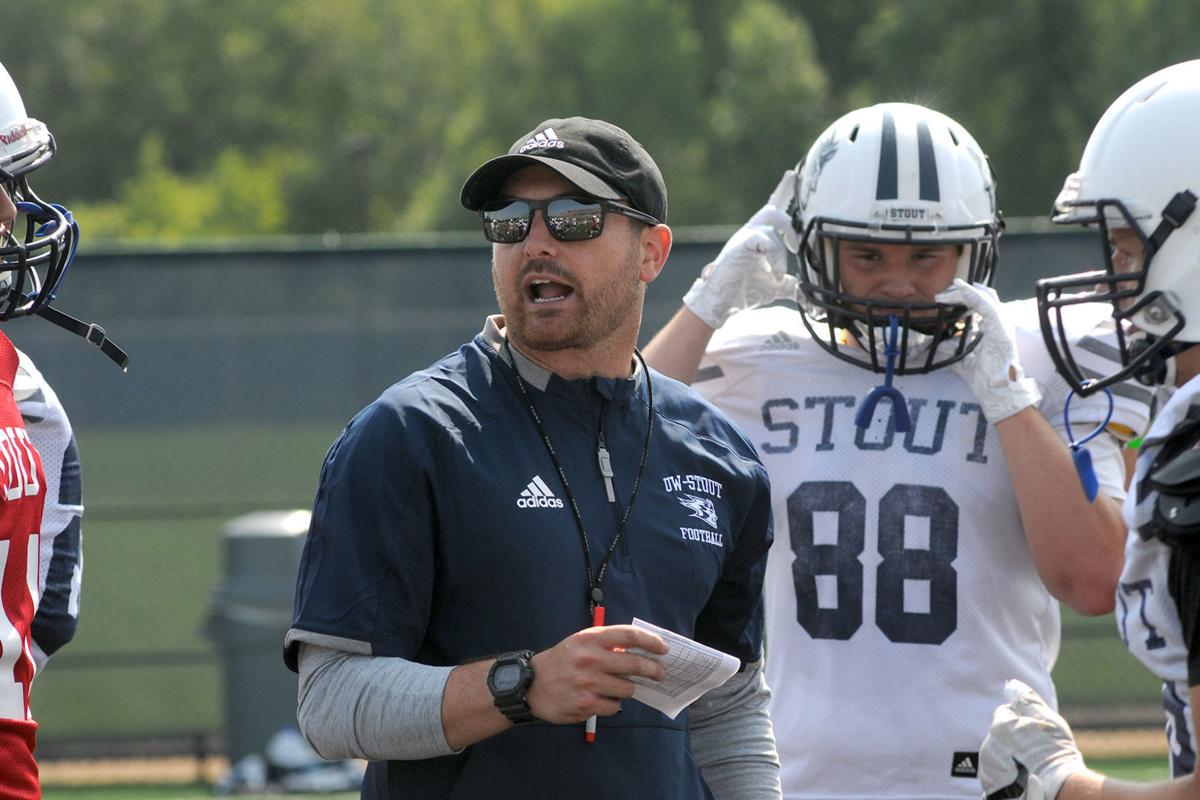 Nick Pesik coached at UW-Whitewater for three years before becoming the offensive coordinator at UW-Stout prior to the 2019 season. 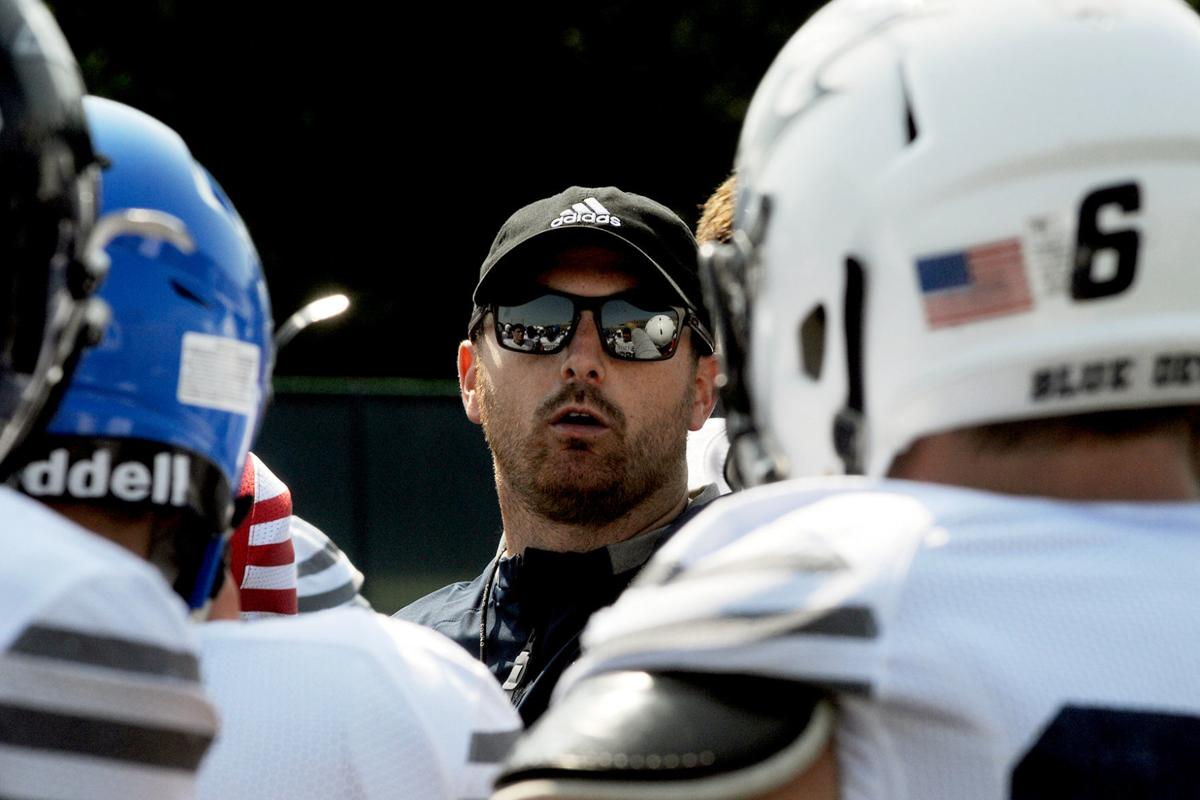 Nick Pesik gives instruction to UW-Stout players during a summer camp. Pesik spent three years as the coach of the wide receivers at UW-Whitewater before taking over as offensive coordinator at UW-Stout.

Nick Pesik coached at UW-Whitewater for three years before becoming the offensive coordinator at UW-Stout prior to the 2019 season.

Nick Pesik gives instruction to UW-Stout players during a summer camp. Pesik spent three years as the coach of the wide receivers at UW-Whitewater before taking over as offensive coordinator at UW-Stout.

WHITEWATER — Nick Pesik spent three years as the wide receivers coach at the University of Wisconsin-Whitewater.

The roots of the dynamic receiver group the Warhawks have this season is rooted in Pesik’s recruiting and Pesik’s focus on detail.

Pesik was hired by UW-Stout in the off-season and has been the offensive coordinator this season for the Blue Devils, who will visit the Warhawks this Saturday for a 2 p.m. kickoff in the penultimate game of the Wisconsin Intercollegiate Athletic Conference season.

“He’s put his time in and he learned from our staff. He learned from Coach Smith and Coach Jennings. That’s what you do as a position coach, you learn from your coordinators, you take pieces you like and you make it your own. You take pieces that you don’t like and you don’t. Nick is one of those guys who is extremely organized and extremely detailed, and those are the characteristics you find in a coordinator, whether that’s offense or defense.

“I hope he has a bad day on Saturday,” said Bullis in good humor.

One of the things he picked up in his three years from Smith and Jennings was the willingness to adapt schemes and game plans to fit personnel. Pesik inherited an offense with sophomore Sean Borgerding at quarterback, a physical athlete with the ability to throw and run. Pesik inherited an offense historically predicated on a physical rushing attack. In 2018, the Blue Devils had a pair of running backs splitting carries.

But Pesik noticed he had a talented group of receivers, so they’ve been more focused on the passing game, which has meant Borgerding spreading the ball around to Kevion McDonald, Levy Hamer and Tyler Seymour.

“My time at Whitewater, every year was a little bit different,” Pesik said. “Our strength right now is our wide receiver corp and our receivers, so we’re using that to find success.

“(UW-W’s) strength is their offensive line and they have one of the best running backs in the country. So they’re going to be running the ball more to set up the pass. But right now, we’ve found that throwing the ball to set up the run is working for us. Both ways work, but it’s based on what you have.”

One commonality that Pesik has taken from his time UW-Whitewater and his time as an assistant at Northern Illinois is attention to detail.

“(Pesik) did a good job right away coming in and making sure we were focusing on basics and the simple things,” Borgerding said. “He is always emphasizing the little things. If we’re watching film, he’s going to point out all of the small details that can lead to big plays. It’s not talent that puts you in position to make plays it’s the details. ...

“Everybody is focused on doing their job. I think he does a good job of not letting the little things get by. Even when it’s a good play, he’s still reminding us of little things that could have led to a great play.”

“Both of those teams were good tests for us and they both play fast,” Pesik said. “That’s the biggest thing when you prepare for teams like them or like UW-Whitewater is that they have speed across the field.

“You get that with Platteville and Oshkosh too. Our biggest challenge is playing four quarters every game. We’ve been playing one or two (good quarters) against those teams, but haven’t played a full game.”

Going into Perkins Stadium, they’ll need to put together a complete game to knock off the third-ranked undefeated Warhawks (8-0, 5-0), which have an opportunity to clinch a share of their 37th WIAC title on Saturday.

“He’s definitely taken pieces of what we’ve done here, which is what you always do as a coordinator and he’s put his own signature on it,” Bullis said. “We don’t run power read, for example, but he’s running some power read stuff, which goes back to his experiences at Northern Illinois when he (was coaching) for Rod Carey. ... They definitely made that a key piece of what they do at Northern Illinois and you can definitely see some reflections of what we’ve done here whether it’s in the pass game or in the run game.

“That’s what you do when you’re a young guy, you take your experiences and you make them your own when you become a coordinator.”