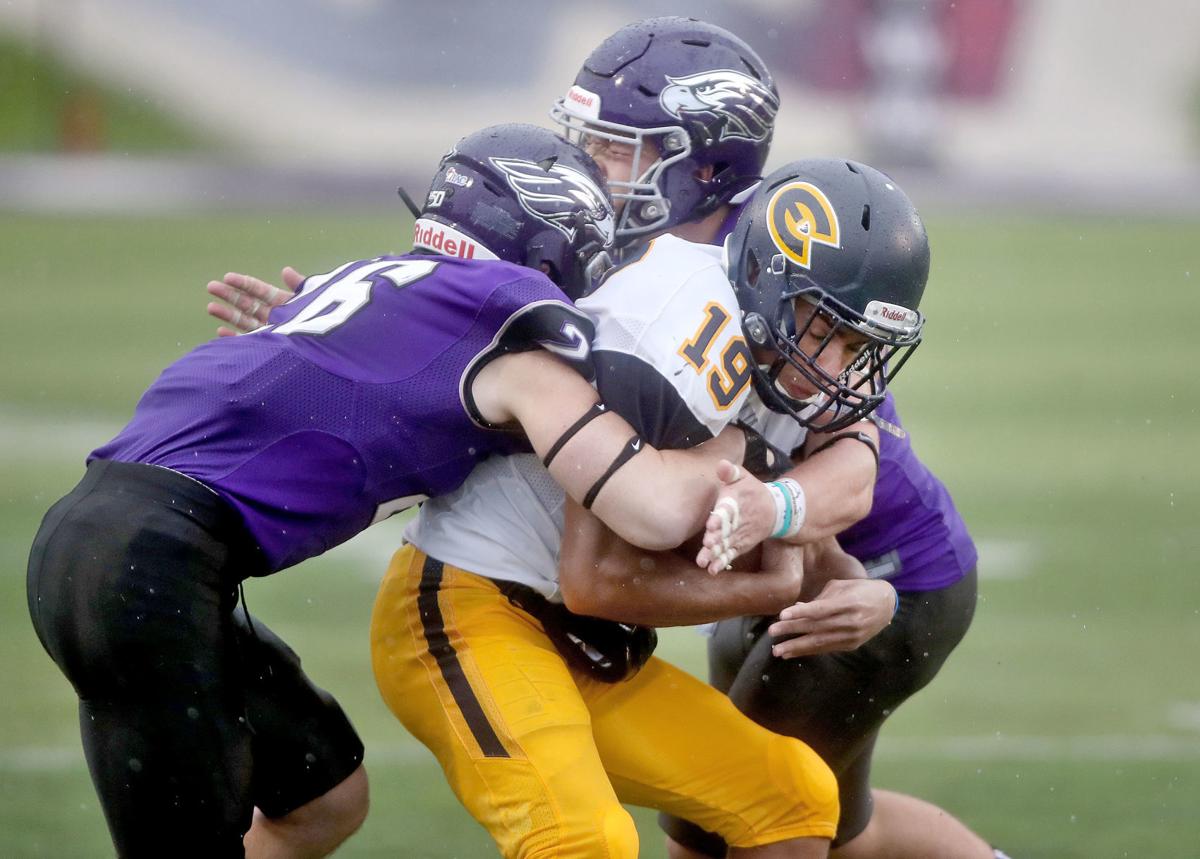 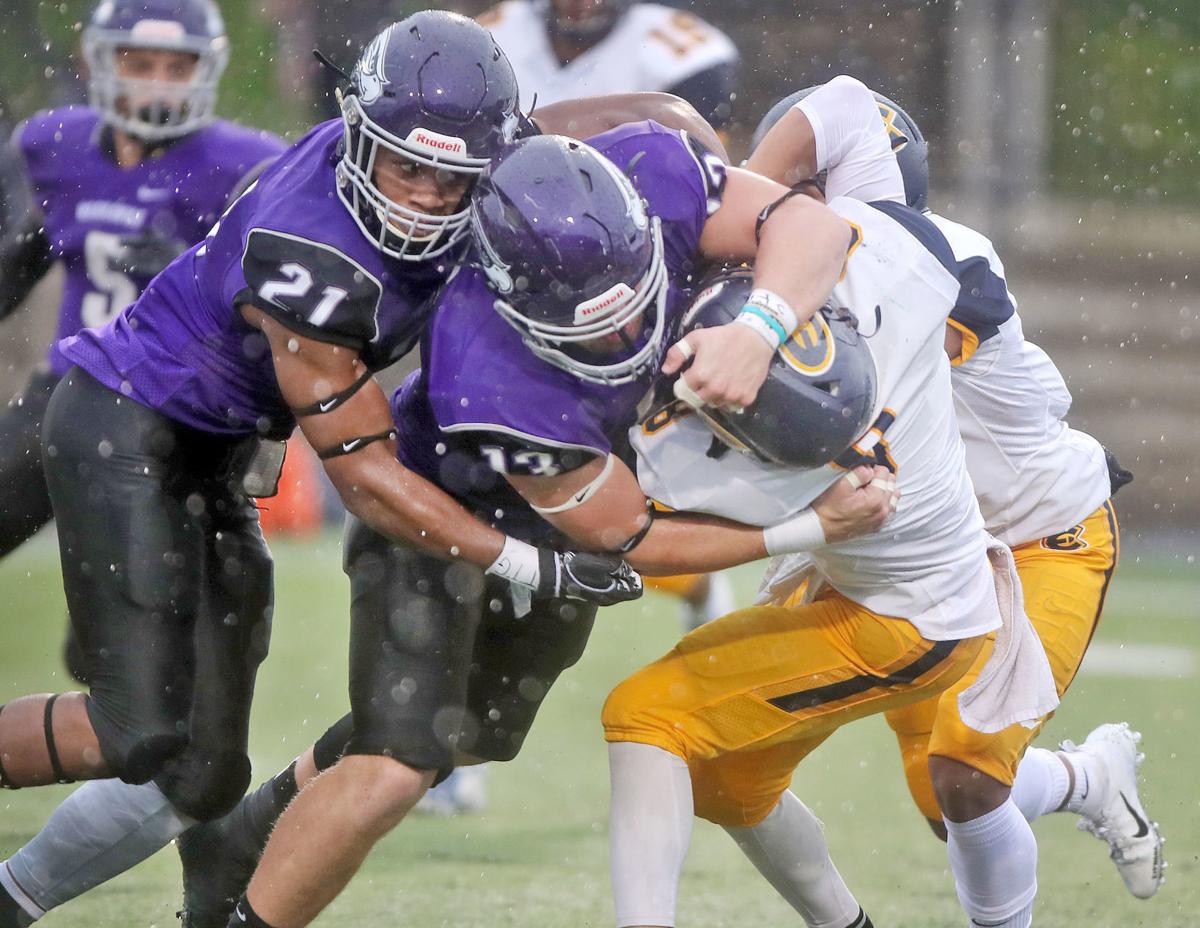 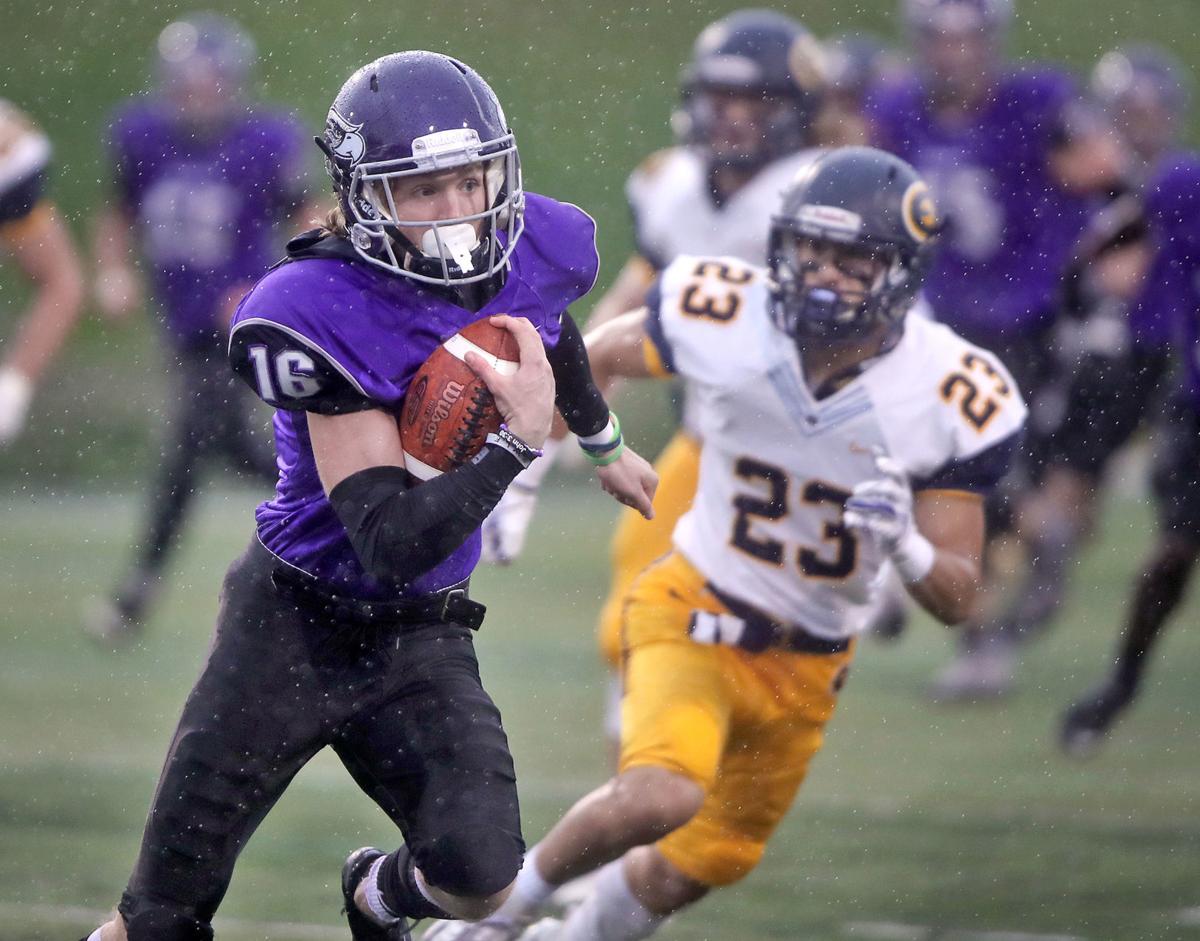 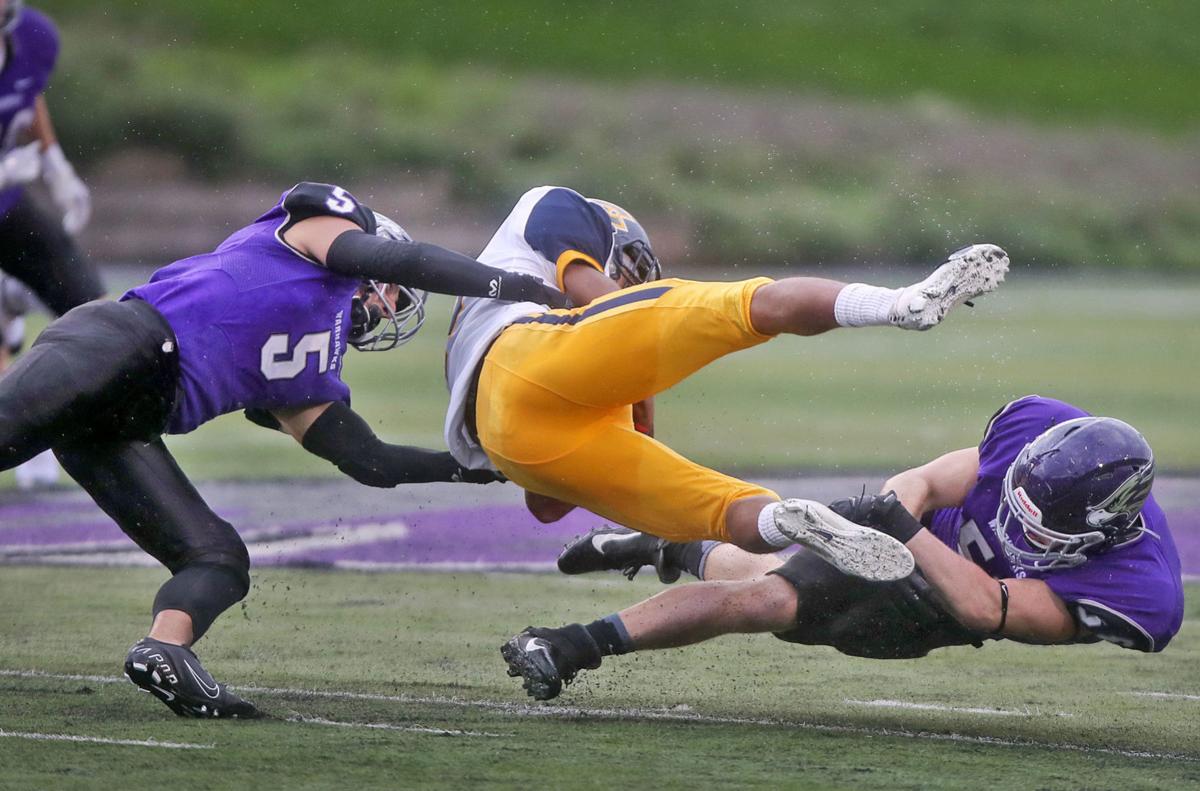 UW-Whitewater’s Tommy Matoska, left, and Matt Anderson, right, both bring down UW-Eau Claire’s Darius Jones during the first half of their game in Whitewater on Saturday, Oct. 5. UW-Whitewater defeated UW-Eau Claire 24-14. 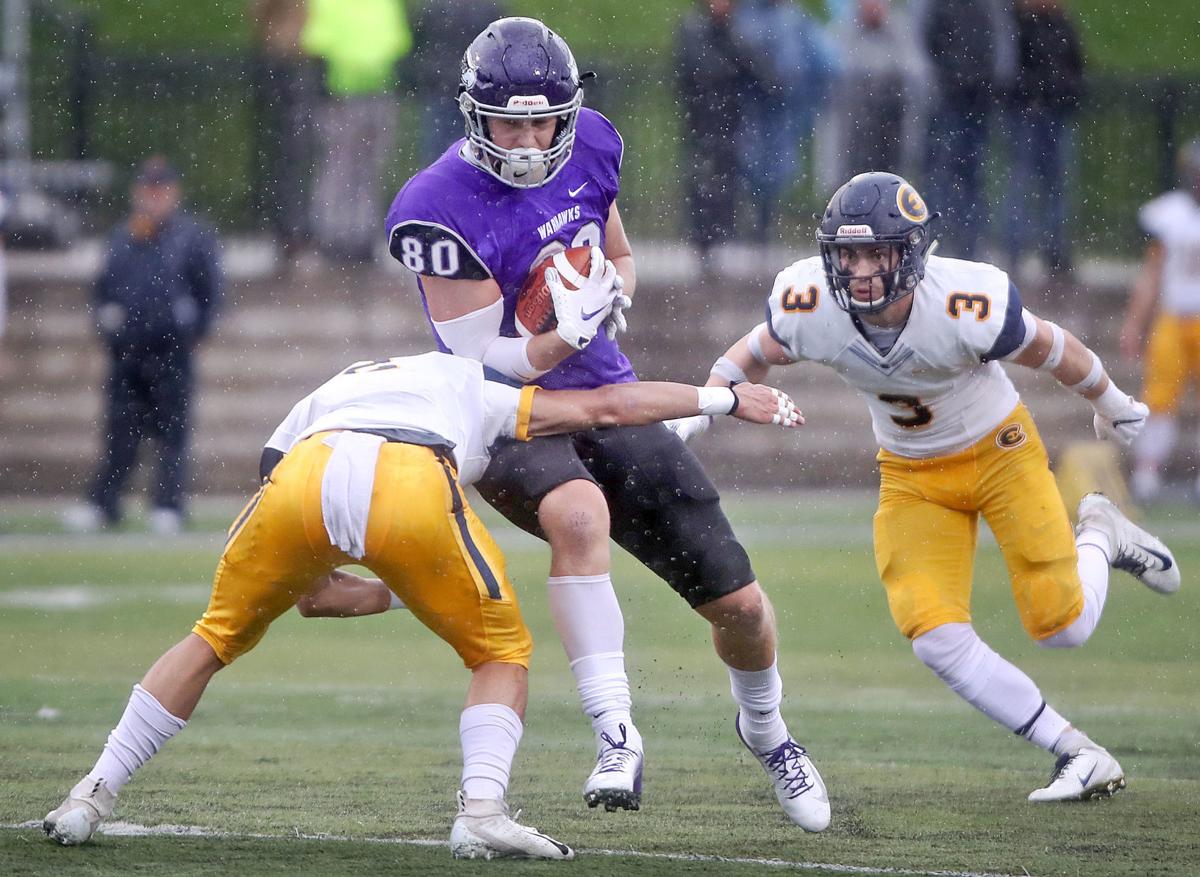 UW-Whitewater’s Tommy Matoska, left, and Matt Anderson, right, both bring down UW-Eau Claire’s Darius Jones during the first half of their game in Whitewater on Saturday, Oct. 5. UW-Whitewater defeated UW-Eau Claire 24-14.

WHITEWATER — Down by 10 points with 85 seconds left, the University of Wisconsin-Eau Claire football team needed a miracle to upset UW-Whitewater.

The Blugolds had just called their second timeout of the half after the Warhawks knelt on first down. Senior running back Jarrod Ware fumbled on the next play, setting up the Blugolds with the ball and 80 seconds on the clock at Whitewater’s 24-yard line.

Senior cornerback Jacob Frey deflected a pass five plays later, finally ending Eau Claire’s bid to upset a ranked team for the second straight week. The Warhawks escaped with a 24-14 victory in their Wisconsin Intercollegiate Athletic Conference opener at Perkins Stadium on Saturday in front of an announced crowd of 9,822.

“That last fumble, we should have kneeled that out,” Whitewater coach Kevin Bullis said. “I’ll take credit or blame for that one. … We wanted to run the ball one more time because we figured out they were going to call their timeouts. They wanted to play the timeout game, so we said, ‘Sure, we’ll run the ball.’

“Ultimately, we could have kneeled it out and there are different ways to manage those seconds. We could have literally grabbed the ball and run backward to take a knee, but that’s always kind of sketchy.”

The Warhawks were able to separate themselves in the third quarter when Eau Claire fumbled on consecutive possessions. Whitewater turned both turnovers into touchdowns.

“It was self-inflicted wounds, ball security. Don’t let the game of football beat you,” Eau Claire coach Wesley Beschorner said. “Last week we didn’t (let the game beat us). This week we did. I think our kids played hard. If they play hard and really smart, you give yourself a chance to win against whoever you play against.”

Whitewater cornerback Garrett Purdy forced Eau Claire’s first fumble, with Frey recovering. Junior running back Alex Peete plunged into the end zone for a 1-yard touchdown run to cap an eight-play, 64-yard drive and give the Warhawks a 16-7 lead.

Mark McGrath forced and recovered the second fumble. Ware scored from two yards out to finish a nine-play, 46-yard drive for a 24-7 lead with 3:06 left in the third quarter.

Even with UW-Eau Claire advancing the ball, the Warhawks were able to get off the field with turnovers.

“Throughout the whole game, one of our goals is to create turnovers,” Whitewater senior captain and safety Nate Tranel said. “We trust the offense, we know they’re going to do their job. Us getting turnovers is exciting, that’s what we want. We want a certain amount of turnovers depending upon how many plays we play.”

Both teams traded traded botched snaps on punts in the second quarter. Whitewater took over at Eau Claire’s 15-yard line and then ran one play before a 35-minute lightning delay sent both teams to their locker rooms.

After the break, the Warhawks ran two plays and settled for a 27-yard field goal from Wojciech Gasienica with 9:27 left in the first half.

UW-Whitewater punter Andy Cooper mishandled a snap over his head by senior long snapper Mason Fleury on fourth down on Whitewater’s next possession. Eau Claire’s Conrad Bolz scored from six yards out to trim the deficit to 10-7 with 1:06 remaining in the second quarter.

The Warhawks mishandled two punt snaps, one snap on a PAT and three shotgun snaps to Oles. The Blugolds fumbled four times and lost three of them.

UW-Eau Claire made it difficult for the Warhawks to run the ball as effectively as their reputation dictates they’re supposed to. Peete broke free for a 45-yard touchdown run on the second offensive play of the game to take a 7-0 lead at the 13:05 mark in the first quarter. Without that play, UW-Whitewater ran the ball 39 times for 71 yards—an average of 1.82 yards per carry.

“It’s always hard running in the rain because when it is raining, the defense knows we’re going to be running a little bit more,” said Peete, who finished with 13 carries for 108 yards.

The Blugolds relied on stunting on their defensive front to counter Whitewater’s physical advantage at the line of scrimmage. Bullis said the first touchdown of the game was a product of a stunt missing its target.

“They run them much more often than we do. That’s the gamble of the game,” Bullis said. “Eventually, there are diminishing returns on (success of stunts) because offenses are figuring it out.”

Whitewater will host UW-Platteville on Saturday in the George Chryst Bowl at 2 p.m. The Warhawks will celebrate their Hall of Fame inductees as part of Homecoming festivities.The Blugolds will return home to play against UW-River Falls in their Homecoming game on Saturday at 1:10 p.m.