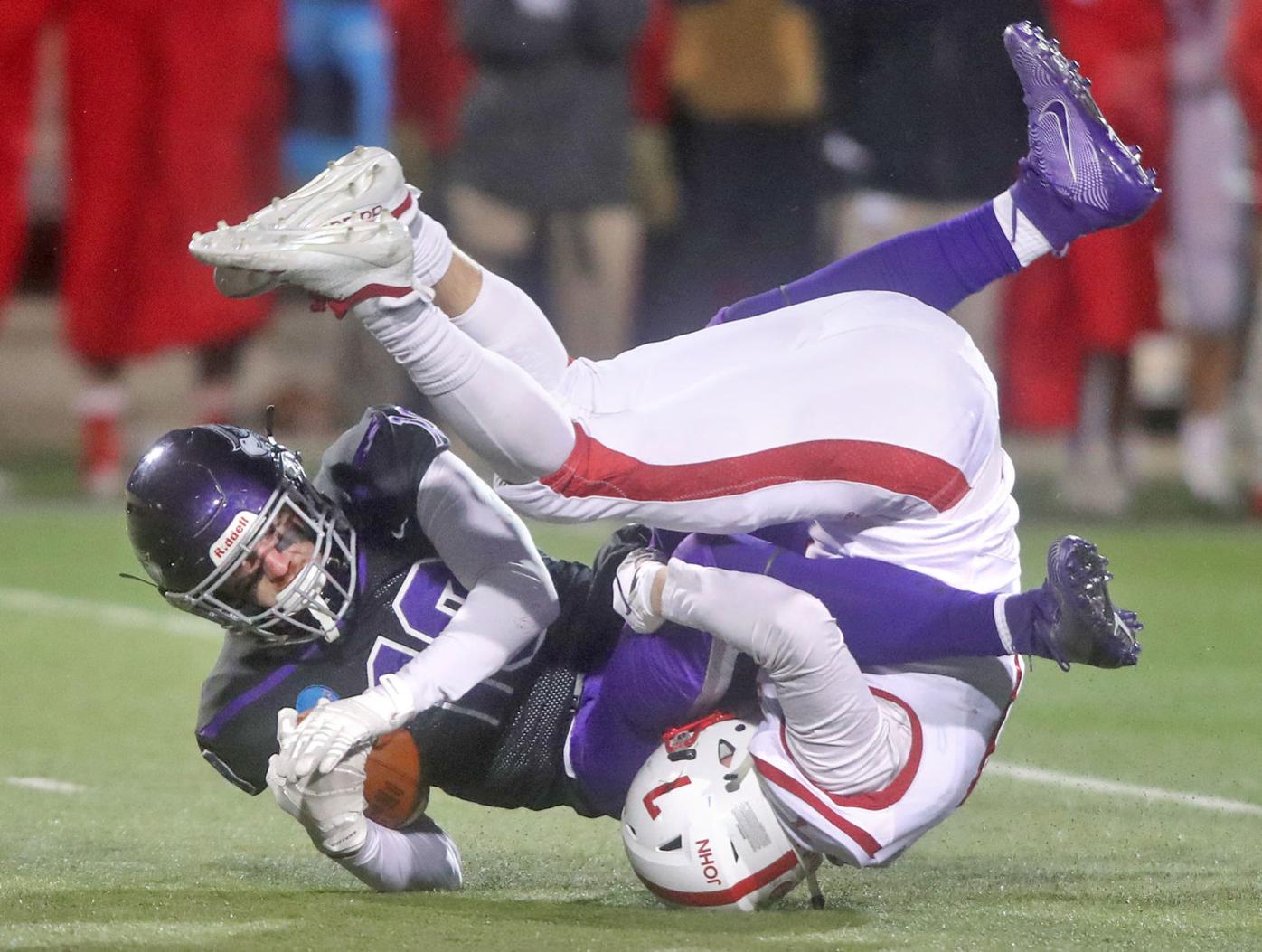 UW-Whitewater’s JT Parish holds onto the ball as he’s tackled during their NCAA Division III national semifinal playoff game at Perkins Stadium in Whitewater on Saturday, Dec. 14. Football, along with women’s soccer, volleyball and cross country was canceled by the WIAC on Monday. 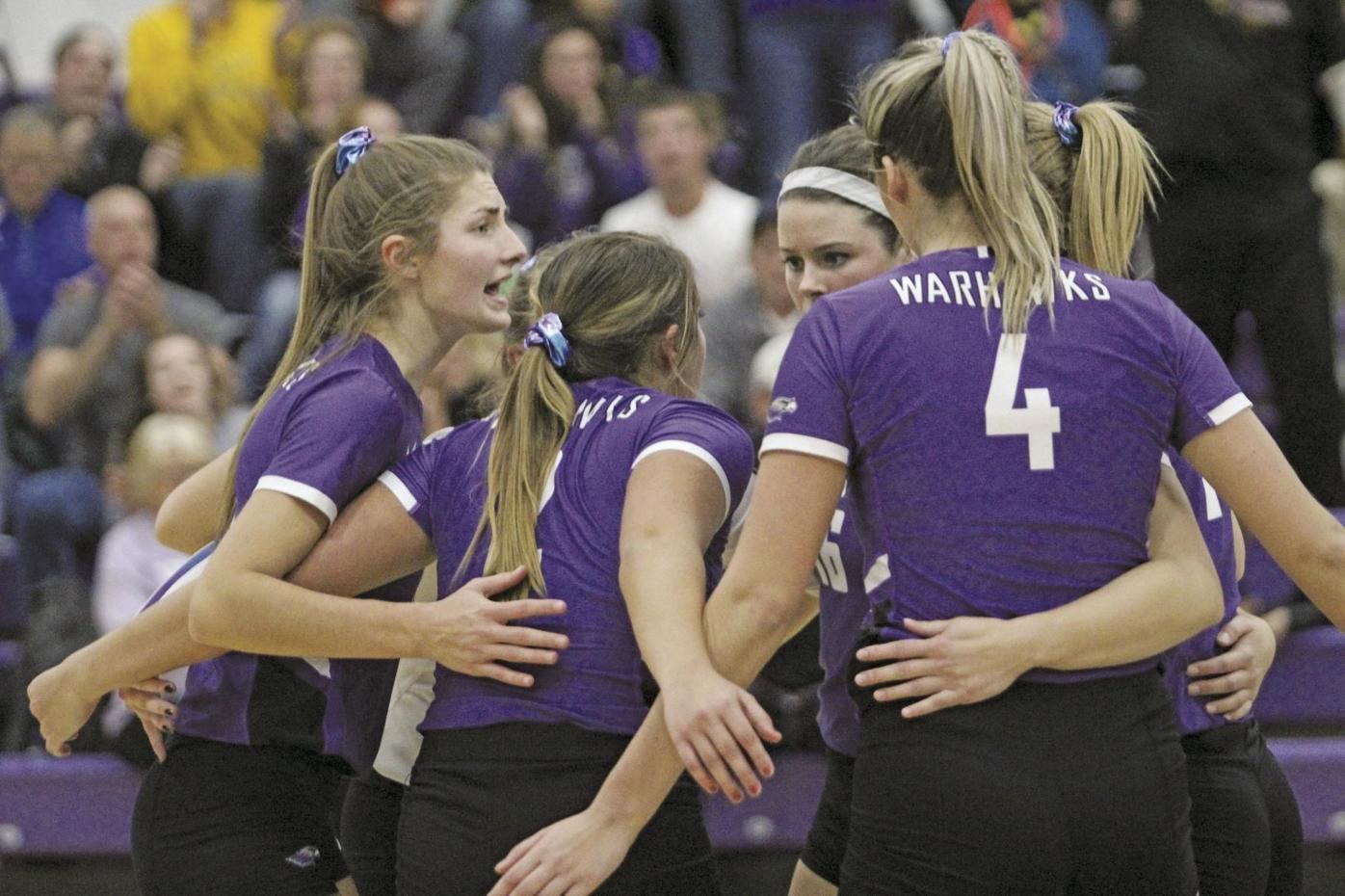 The UW-Whitewater volleyball team regroups after a point during the WIAC Tournament final last season. Volleyball, along with football, women’s soccer and cross country was canceled by the WIAC on Monday. Women’s tennis and golf was moved to the spring time.

UW-Whitewater’s JT Parish holds onto the ball as he’s tackled during their NCAA Division III national semifinal playoff game at Perkins Stadium in Whitewater on Saturday, Dec. 14. Football, along with women’s soccer, volleyball and cross country was canceled by the WIAC on Monday.

The UW-Whitewater volleyball team regroups after a point during the WIAC Tournament final last season. Volleyball, along with football, women’s soccer and cross country was canceled by the WIAC on Monday. Women’s tennis and golf was moved to the spring time.

There won’t be any bus rides this fall for the UW-Whitewater head football coach.

“It’s going to be strange,” Bullis said of the upcoming months without football games.

The WIAC canceled the football, women’s soccer, volleyball and men’s and women’s cross country seasons and championships for the 2020-2021 school year. Teams in those sports will be allowed to practice and train within NCAA guidelines.

That is something positive that Bullis will stress to his players. They will still have training sessions and practices, but held with safety measures in place.

Still, it gives Bullis something to build on.

“Our intent is to play five games,” Bullis said of a proposed spring schedule. “Nothing has been solidified, but they are talking about 114 practices and talking about five games in the spring. We’ll take advantage of whatever they can give us.”

The WIAC plans to make an announcement about the winter sports season later. The Midwest Conference has canceled all events through Jan. 1, 2021.

The WIAC plans to have a conference season and championships in women’s tennis and women’s golf--two other sports typically played in the fall--during the spring season.

A spring season would give seniors in fall sports the opportunity to close out their careers on the field, if they choose to do so.

In addition, the NCAA has ruled that athletes that play in less than 50% of a normal season—in football, that would be five games—will not have the season count toward eligibility. So seniors that played in the potential five-game spring season could return and play in the 2021-22 school year.

“That’s the message I’m going to give to our players,” Bullis said. “Hey, if they give us five games in the spring, that’s five bonus games on the top of your career. We’ll treat it as a developmental thing.”

The NCAA Division I conferences are going to wait as long as possible before pulling the plug on their fall season. The revenue involved with TV contracts makes that plug weigh as much as 20 manhole covers.

Division III schools also will take a financial hit without football, but cancelling the season is the correct step.

“I am proud of the conference and our fellow member institutions for putting together a plan to return to play as soon and as safely as possible,” said Ryan Callahan, UW-Whitewater interim athletic director, in a statement.

“As has been the case throughout this process, the health and well-being of our student-athletes and staff will be at the forefront of discussions moving forward.”

The Midwest Conference, which includes Beloit College, just ripped the 2020 calendar off the wall.

“We did everything we could over the past couple of months to develop schedules, event management protocols and testing policies so that we could compete this fall,” said MWC Executive Director Heather Benning. “However, due to the recent sustained surge of cases across the country, and a lack of guaranteed access to timely and reliable testing with the frequency recommended by the NCAA, the conference does not feel it is in a position to sponsor intercollegiate athletic competition at this time.”

So this fall is shaping up to look very much like what we have been going through since March when college sports halted just before the basketball tournaments.

It shouldn’t be a surprise if the winter sports seasons also are affected. With no vaccine, things aren’t going to get better.

Bullis is going to make the best of it, especially since athletes can return next season with the same eligibility as they have now.

“The national average is four years and a semester (to graduate),” Bullis said. “It has been that for a long time. Kids don’t major in just one thing, so it’s very common for kids to be in college for that fifth year.”

That might be the only common thing this fall.