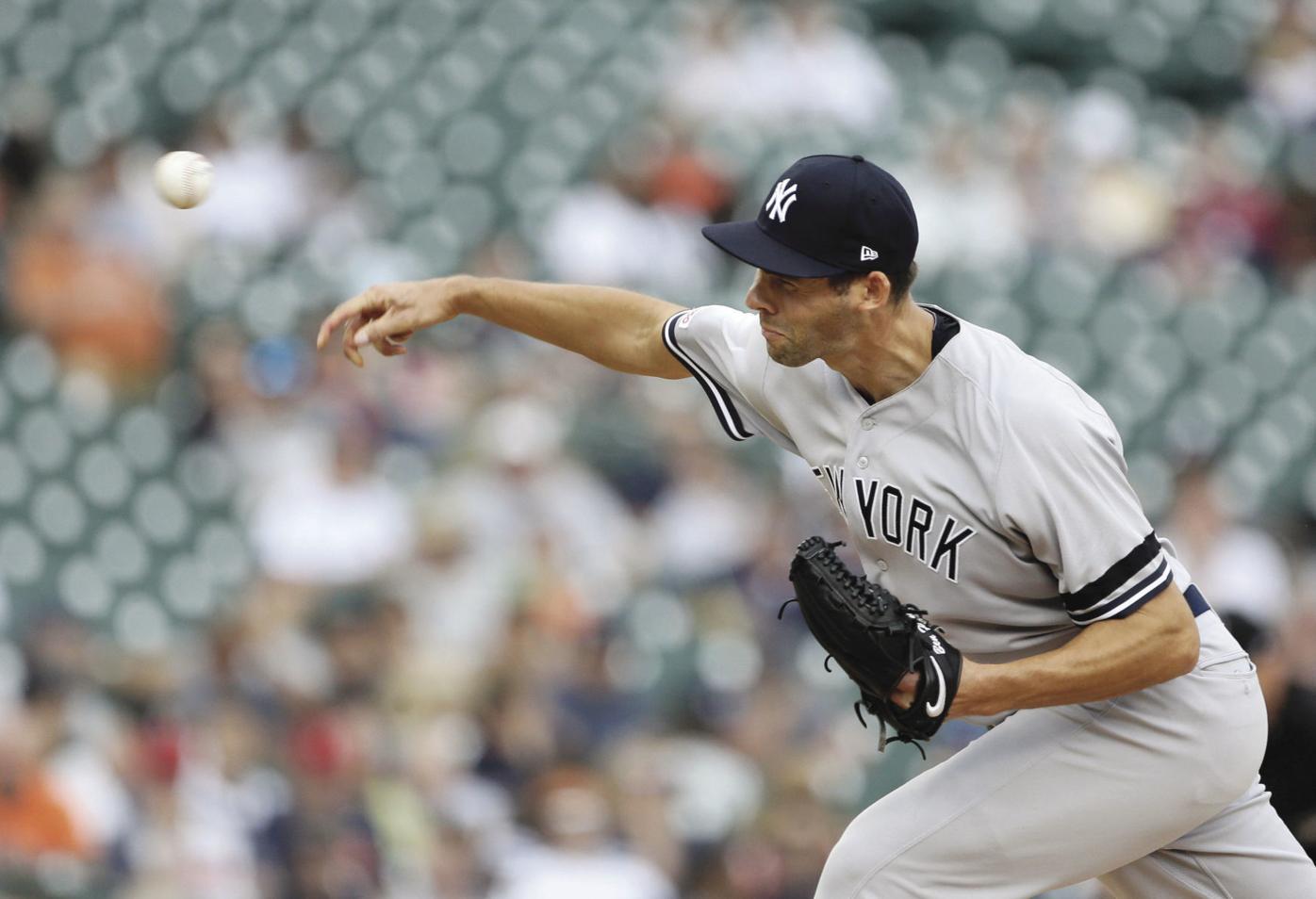 Yankees righty Ben Heller pitches against the Tigers during the eighth inning of a game last September. Heller, a 2009 Whitewater High School graduate, is getting set for his fourth season of relief pitching in New York. He missed all of the 2018 season and much of last year after undergoing Tommy John surgery. Heller has thrown 251/3 innings, striking out 24 hitters and boasting a 2.49 ERA in his career. 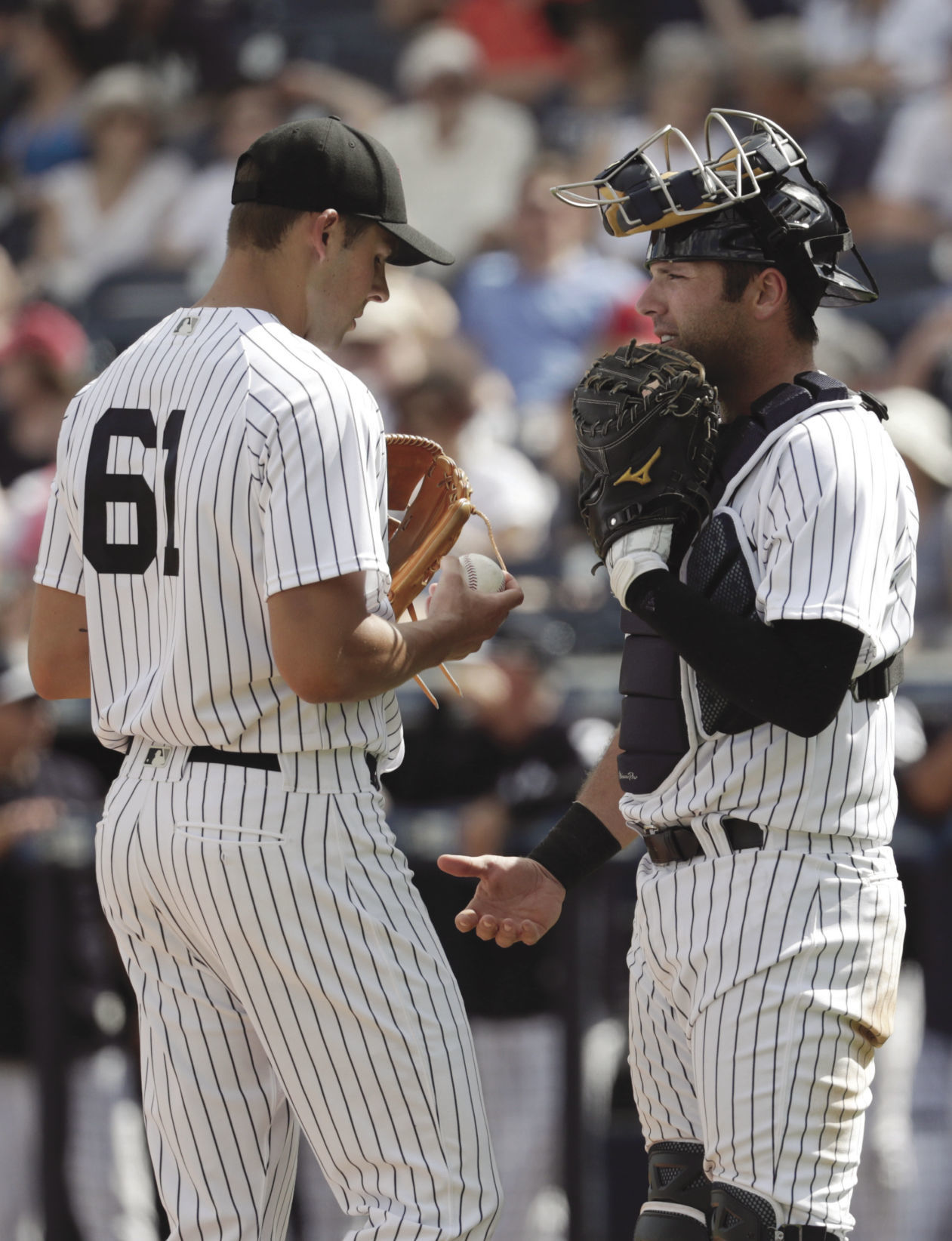 New York Yankees pitcher Ben Heller (61) talks with catcher Austin Romine, right, during the fourth inning of a baseball spring exhibition game against the Detroit Tigers, Friday, Feb. 23, 2018, in Tampa, Fla. Baseball debuts its new restrictions on visits to the pitcher’s mound _ six per game by managers, coaches and players and without a pitching change. (AP Photo/Lynne Sladky) 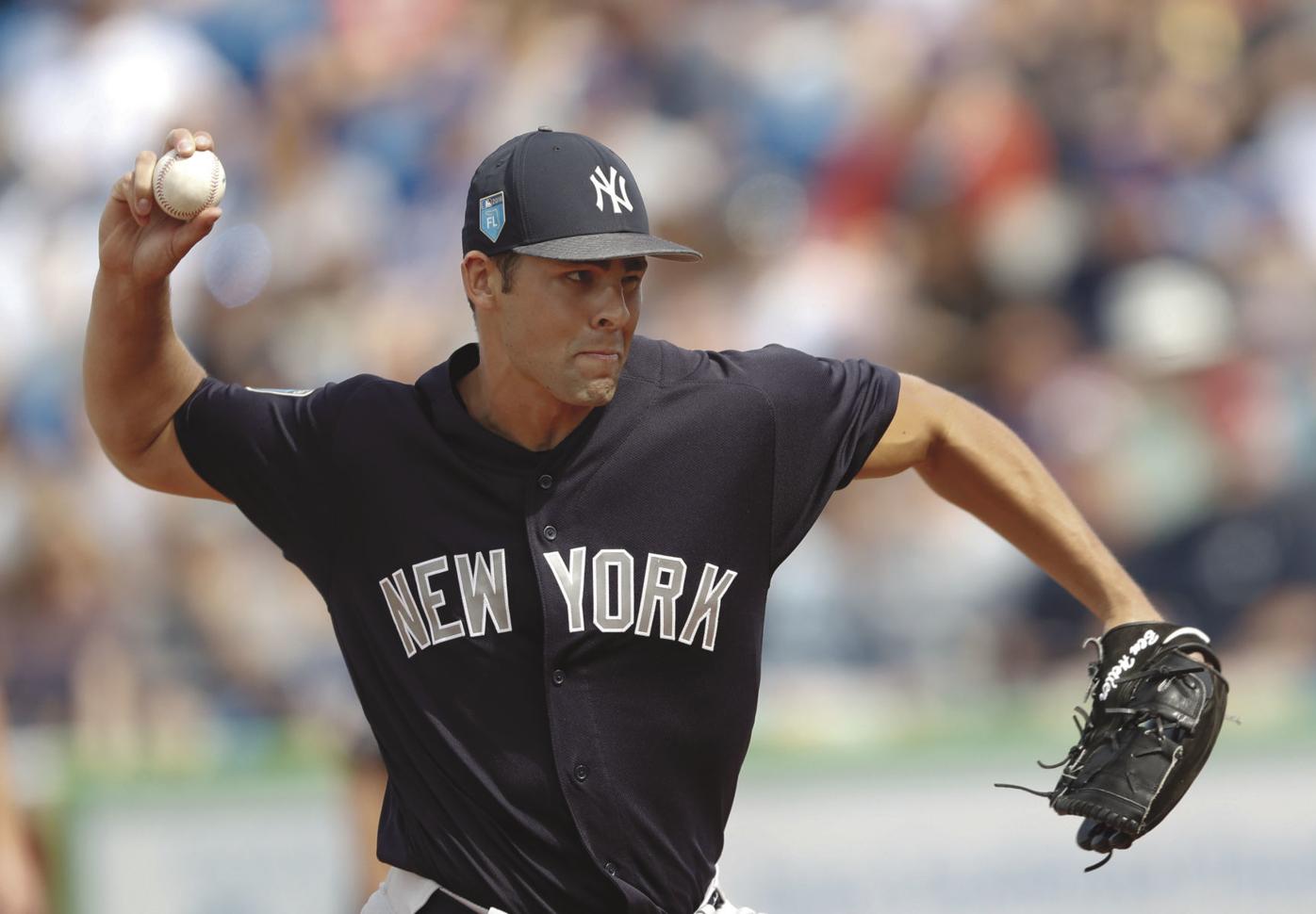 Yankees righty Ben Heller pitches against the Tigers during the eighth inning of a game last September. Heller, a 2009 Whitewater High School graduate, is getting set for his fourth season of relief pitching in New York. He missed all of the 2018 season and much of last year after undergoing Tommy John surgery. Heller has thrown 251/3 innings, striking out 24 hitters and boasting a 2.49 ERA in his career.

New York Yankees pitcher Ben Heller (61) talks with catcher Austin Romine, right, during the fourth inning of a baseball spring exhibition game against the Detroit Tigers, Friday, Feb. 23, 2018, in Tampa, Fla. Baseball debuts its new restrictions on visits to the pitcher’s mound _ six per game by managers, coaches and players and without a pitching change. (AP Photo/Lynne Sladky)

Like most major league baseball players, Ben Heller cannot wait until the start of the 2020 season, abbreviated as it is due to the coronavirus pandemic.

When the season does officially start, the former Whitewater High School standout will be in his fourth year with one of the most storied franchises in all of professional sports—the New York Yankees.

The hard-throwing right-handed relief pitcher was among 58 players—33 of them pitchers—invited to participate in the New York team’s summer camp. He explained how the Yankees are doing their best to limit the amount of players at one time at the camp, which is being held inside Yankee Stadium.

“Some of the players are at the team hotel while others are at the stadium; shuttle buses are going all day back and forth,” Heller said. “They’re trying to spread out the workouts as much as possible. They really only want you to be at the field for the amount of time you’re needed to be there.”

On a typical day when Heller is facing hitters in game-like situations, he will show up before game time, do his warmups and then pitch. The days he’s not pitching, like all the other pitchers he will go to the stadium at a staggered time to conduct his workout.

“If you’re not pitching or playing, typically you don’t stay for the (simulated) games,” he said.

Heller was at Yankee Stadium when a scary situation occurred this past Sunday, as All-Star outfielder Giancarlo Stanton lined a pitch off the head of pitcher Masahiro Tanaka.

“I wasn’t on the field when it happened,” he said. “That’s every pitcher’s worst nightmare—and hitter’s, too—especially facing your own teammate. Tanaka seems like he’s doing pretty well, (so) we’re all thankful for that.”

Practicing at an empty Yankee Stadium will be similar to all the games this summer, as Major League Baseball will not permit fans to attend during the pandemic.

“While it may not be as satisfying, at the end of the day I’m getting to compete against the best baseball players in the world.”The 28-year-old Heller, a 2009 Whitewater grad, also tries to keep his perspective.

“It’s still pretty special to be able to take the field at Yankee Stadium,” he said.

“I try to never let a day go by where I don’t take for granted that I get to step onto a major league field. I really try to look around and appreciate where I’m at and what it took to get here.”How he got here

Heller was drafted by the Cleveland Indians in the 22nd round (651st overall) of the 2013 MLB June Amateur Draft after pitching at Olivet Nazarene University, an NAIA program located in Bourbonnais, Illinois.

He worked his way up the minor league ladder in the Indians’ system, but in July 2016 his fate changed.

Heller was part of a trade that saw the Yankees deal one of the game’s top relief pitchers, Andrew Miller, to Cleveland for two top prospects—outfielder Clint Frazier and left-hander Justus Sheffield—along with former UW-Stevens Point pitcher JP Feyereisen (now with the Milwaukee Brewers) and Heller.

Heller made his major league debut less than a month after the trade. In a relief performance against the Baltimore Orioles on Aug. 26, 2016, Heller threw a scoreless eighth inning. He got Francisco Pena to fly out to right before Nolan Reimold popped up behind home plate. After Huyn Soo Kim reached on an error, Heller forced all-star Manny Machado to hit into an inning-ending fielder’s choice grounder.

“It was all such a whirlwind,” Heller recalled. “I got traded from a team I spent my entire minor league career with on the last day of July, and now a couple of weeks later I’m in the big leagues with the New York Yankees— I’m now teammates with Alex Rodriguez and Mark Teixeira, legends of the game and guys I grew up watching and idolizing. It was definitely surreal.

“When I did actually take the mound, it was an extreme moment of satisfaction. All the years of hard work and grinding through all the ups and downs coming into that moment, it’s what you dream of as a kid. It definitely lived up to that dream.”

Heller experienced arm troubles during spring training in 2018, and in April it was decided he would undergo Tommy John surgery, named after another former Yankees pitcher. The procedure takes a healthy tendon extracted from an arm (or sometimes a leg) and is used to replace an arm’s torn ligament. The healthy tendon is threaded through holes drilled into the bone above and below the elbow.

Heller missed the entire 2018 season, which would have been his third with the Yankees, but did return in 2019. In six appearances, he struck out nine batters in 7 1/3⅓ innings while giving up six hits and one earned run.

“It ended up being about a 16-month recovery until I was totally back to 100% in games. Even then, I didn’t quite feel like my old self,” Heller said. “I think the arm just takes a while to really build up that arm strength and have your body get up to that intensity of pitching at 100%. Having this past offseason to build up my strength again also gave my arm a little break.”

He admitted his velocity dropped a little toward the end of last year, but now Heller is back throwing in the mid-to-upper 90s.

“I could still run it up to 95 or even 96, but usually I was 92-93. After this offseason, I’m back in the mid-90s consistently. I’m confident that it will keep trending upward to where it was pre-Tommy John,” Heller said.Heller shares the bullpen with some of the best relievers in the game—players like Aroldis Chapman, Chad Green and Zack Britton. He will continue to pitch middle relief behind starters JA Happ, James Paxton, Tanaka and the biggest free agent pickup of the offseason, Gerrit Cole.

With only a 60-game season ahead, Heller isn’t sure how he and the other relievers will be used week-to-week or even game-to-game.“Every game is going to mean so much more. I think it’s going to almost be like a playoff-like approach to every series, where managers are pretty quick to go to the bullpen when starters are in trouble,” Heller said. “With that being the strength of the Yankees, it gives our team the opportunity to be aggressive with how we use relievers. That puts me in a position of where I may be coming in as early as the third or fourth inning.

During the pandemic Heller stayed at his home in Brookfield, along with his wife, Martha, and their newborn son, Carson.

“That was one definite silver lining to the whole COVID shutdown,” Heller said. “It’s been a blast spending time with him and being home all the time helping my wife take care of him and not missing out on some of his firsts.”

While in Wisconsin, Heller continued his training at BRX Performance in West Allis, a place he has trained at for the past four to five years.

“I do training and throwing, there’s a physical therapist that I work with there, so I was fortunate to use the facility to work on getting better, getting stronger and doing everything I need to do baseball-wise,” he said.

He also experienced something he hasn’t for a number of years, living in Wisconsin during the spring and summer.

“I forgot how nice it is,” he said.But now it has been back to New York and back to baseball for Heller.

With the 60-game MLB schedule released Monday, it was announced that Heller and the Yankees will face the reigning World Series champion Washington Nationals in the first official game of 2020 on July 23 at Nationals Park.“We’ve got to ramp up here pretty quick. But we’re all really looking forward to getting back out there.”