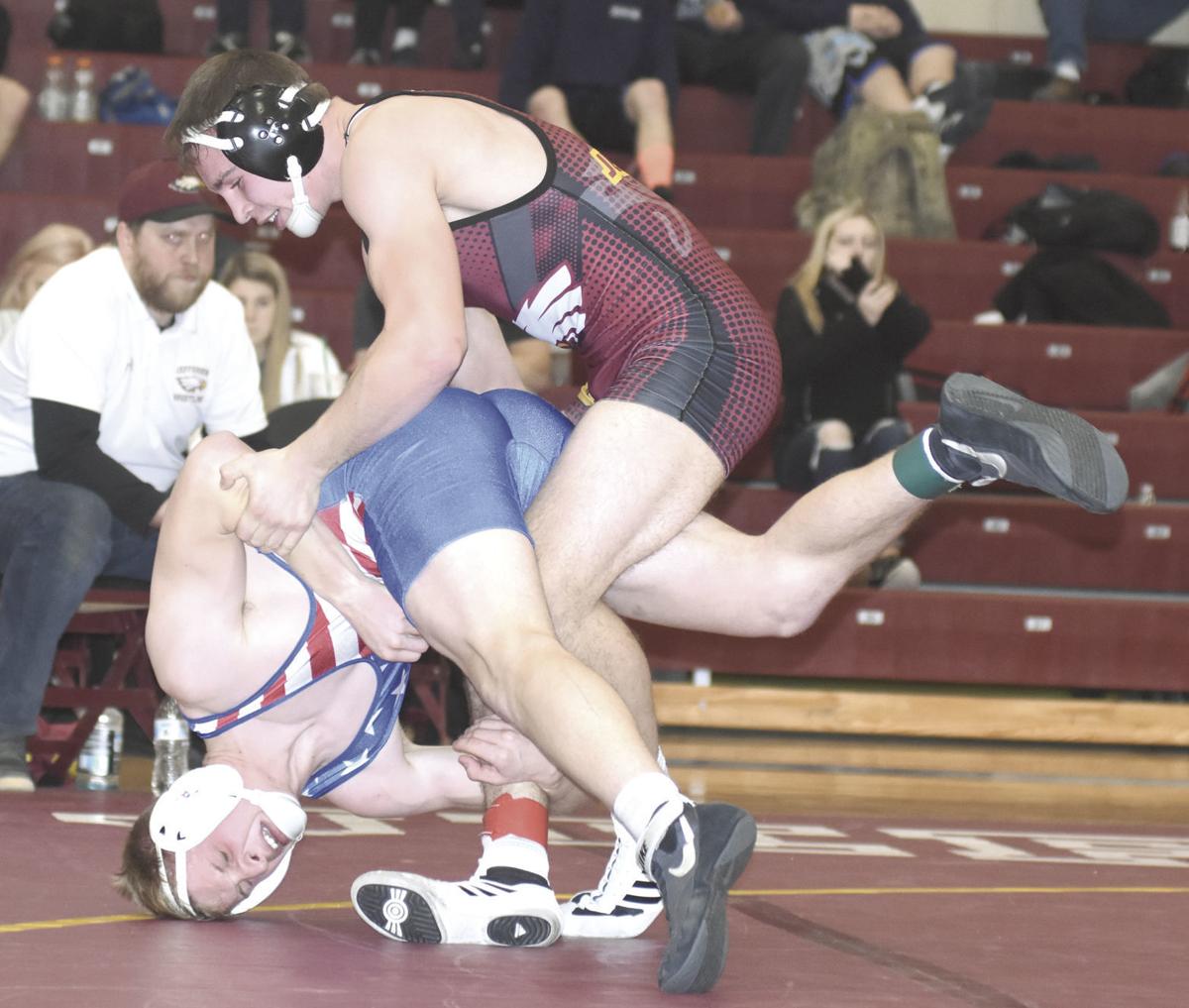 JEFFERSON — Large portions of the Jefferson wrestling regional on Saturday looked like a high-caliber dual meet between Lodi and Portage.

Wrestlers from the two teams met head-to-head six times in the finals.

Jefferson made its presence felt on the home mats, sending five wrestlers to the finals and claiming three titles in the upper weights to highlight a third place total of 170.5 points. All five Jefferson finalists advanced to the upcoming Evansville/Albany sectional on Saturday, Feb. 22.

“Some of the kids went into the finals match knowing Lodi and Portage wrestle tough seasons,” Jefferson co-wrestling coach EJ Pilarski said. “You can’t go in and lay down, and you can’t go in overconfident against some of those guys. We did good. Next week starts to separate some people a lot. I look forward to seeing how that goes. I am proud of how we did today. Ending up third behind Lodi and Portage. I mean, Portage came down from D1. Lodi is always a strong team. Taking third place behind them. Obviously, there is room for growth. Of course, we are hungry for more.”

Lake Mills freshman Ben Buchholtz (152) and junior Charlie Cassady (170) both made the finals and advanced to sectional competition to highlight a fourth place finish for the L-Cats.

Senior Dean Neff won both his matches for Jefferson convincingly to take the title at 160. Neff (41-1) pinned Columbus sophomore Anthony Goelzer in 2 minutes, 20 seconds of the semifinals, then dispatched Lodi senior Jack Hansen with a 19-3 technical fall in the title match.

Neff stepped into Hansen (21-15) and scored single- and double-leg takedowns at will, and threw in a couple tilts for near fall points while riding to pad the lead. The two-time state medalist, currently ranked second among Division 2 wrestlers in his weight class according to WiWrestling.com, has his sights set on a spot in the state finals at the end of the month.

“Yeah, still two weeks away,” Neff said. “I was kind of looking for a pin at the end (of the finals), but a tech is fine. I didn’t have that much to worry about with him.”

Heine (37-6) scored the first takedown against Simplot (23-12) and was consistently better on his feet, but made some mistakes on the mat and got put to his back. He trailed 8-7 heading into the third period and chose to give Simplot an escape and a two-point lead rather than take any more risks on the bottom. Heine took Simplot down with a fireman’s carry and finished the move quickly for the fall.

“I went into the match a little overconfident, to be honest,” Heine said. “In neutral, I felt I was pretty strong. When it came to bottom, I just made a few moves that were risky and he was able to capitalize on some of them. (Choosing to go neutral to start the third), I know I am better there. I just have to do what’s right.”

Not bad for someone who considered walking away from the sport prior to the season.

“It’s hard work,” Lehman said. “It takes a lot of time and effort, and I really like ice fishing. So I was really interested in that, but they talked me into (coming back). I figured I would give it one more season and now I figure will continue wrestling during my high school career. I really like my teammates, just helping out the team. It’s a fun sport. It really helps out all the other athletics, too, like football.”

Jefferson co-wrestling coach Devin Weber liked what he saw in the upper weights.

”All year, in duals, we’ve been dominant on the top side once we hit Dean at 160,” Weber said. “It’s nice to have three champs today. Looking to next week, we’re hoping they can keep their confidence up. During this time of year, that’s what it’s all about. Everyone is 0-0. So it’s where your confidence is at mentally. We’re in a good place as a team.”

A returning regional champion at 132, Dieckman entered the season looking for more, but was quickly sidelined with injuries suffered when he got slammed in the finals of the Creek Classic in November.

“He was out just about a month,” said Jefferson co-head coach Devin Weber. “To come back from something like that … we practice for a month, just to be ready for the first tournament.

“So then to have to sit out for a month, he’s had his ups and downs, but he has done a phenomenal job, last week as a conference champ and today, placing second. He ran into a top-ranked wrestler in the state in finals, but talk about facing adversity and coming out on top, Ethan’s done a great job there.”

Kincaid (20-6) and Columbus senior James Roche personally saw to it that 220 would be the only weight class without a Lodi or Portage wrestler in it. Kincaid won in Sudden Victory-1 over Lodi senior Bryce James (12-8) in the semifinals, then lost by fall to Roche (30-3) in the title match.

While Jefferson has tested itself against tough competition at regular season tournaments, the practice room has been just a pivotal for the Eagles in the upper weights.

”Aaron is my practice partner, so he’s getting better just wrestling me,” Neff said. “He’s figured out how to use his hips more. Brady is only a sophomore, so he’s got a lot ahead of him.”

”I do have two good partners (with Dean and Brady),” Heine said. “Every day in practice, I always have someone to push me. Whether it’s those two or coaches, there are always good matches.”

”Working with Aaron and Dean definitely helps a lot,” Lehman said. “They are really good wrestlers.”

Just as Heine has two hard-working teammates to practice against, so does Lehman with Kincaid.

”That’s huge,” Weber said. “Any time you have competitive guys around the same weight, iron sharpens iron. Dean and Aaron only make each other better, and I don’t want to leave Curtis out. Curtis gives Brady a tough matchup in practice. Curtis is also moving on to sectionals as a senior. If you look back to freshman year, when he was wrestling JV, people might not have believed it, but he’s definitely a Cinderella to make it through to sectionals. Great day for him. I am proud of all five of our kids. Even the kids wrestling in the fifth place match, I feel like everyone battled. I think we peaked at the right time as a team. That’s a testament to the kids.”

Buchholtz (16-8) won a 7-0 decision over Columbus junior Ethan Hendrickson and scored an 11-1 major decision over Pardeeville/Cambria-Friesland/Rio senior Max Raymond to reach the finals, where he lost by fall to Lodi senior Colton Nicolay (29-11) at 1:10.

“Our freshman Ben Buchholtz, he’s been wrestling pretty solid all year,” Lake Mills wrestling coach Tim Braund said. “He’s a good wrestler. He’s got good skill. Charlie Cassady has really turned the corner from last year. He’s starting to believe in himself and he just wrestles hard. We wrestled tougher competition throughout the year and that just kind of set us up.”

”We faced some tougher competition at the beginning of the year, so that way, when we run into (good wrestlers in this setting), we know what to do.”

Schmidt (16-9) lost by fall to Lodi sophomore Dean Finney at 3:08 of the semifinals, but still had a shot to advance after pinning Jefferson’s Jadon Dondlinger in the third-place match. In the wrestleback for second, Schmidt lost to Portage freshman Garret Crawford in SV-tiebreaker 1 by a 6-3 decision.

“We were kind of reloading this season,” Lakeside Lutheran wrestling coach Mike Twohig said. “We lost a bunch of good guys. We’ve got some good ones coming up. They got the experience today and that’s what matters. It would have been nice for Riley to get through. He’s had a really nice year. He just didn’t quite make it.