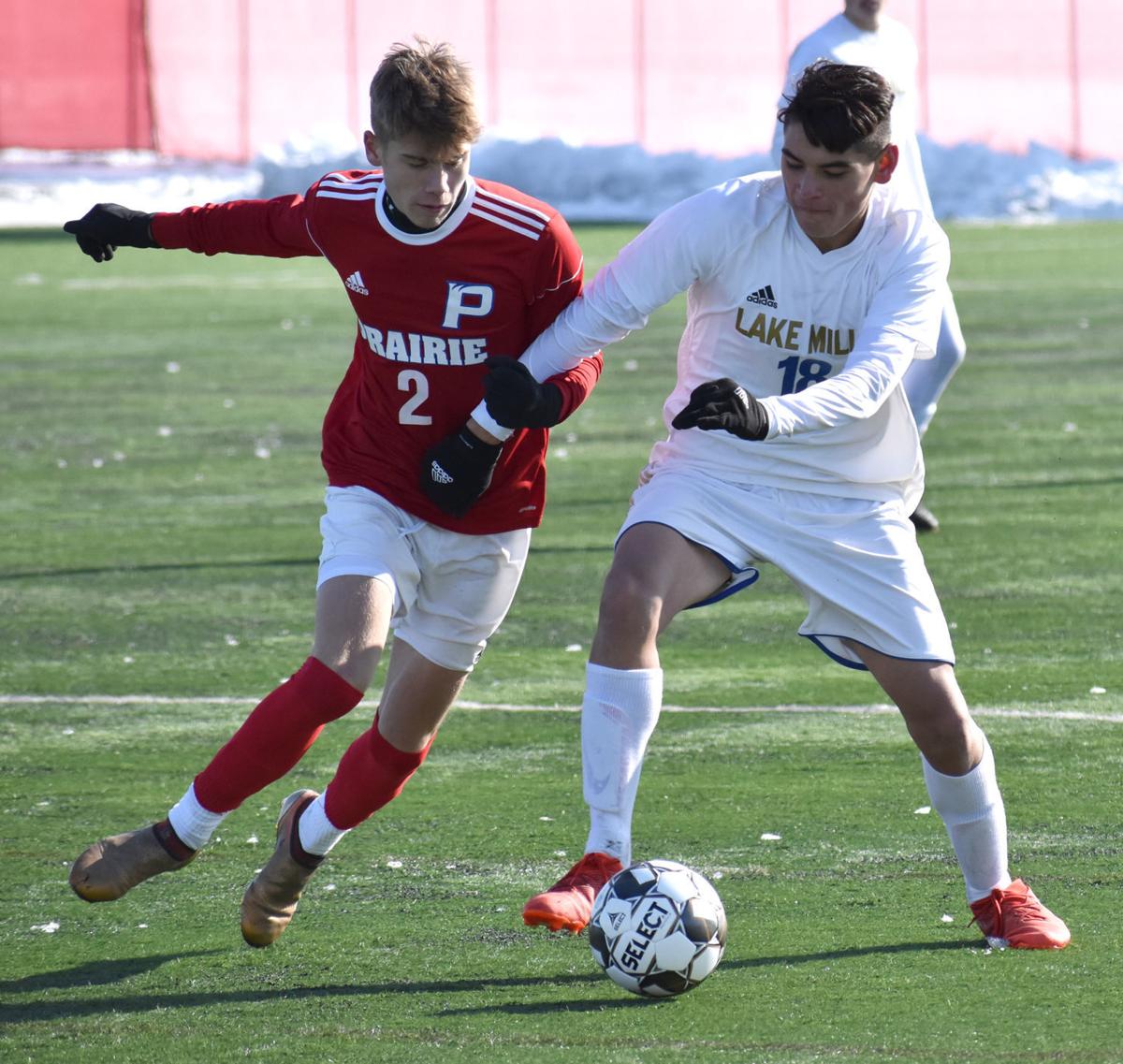 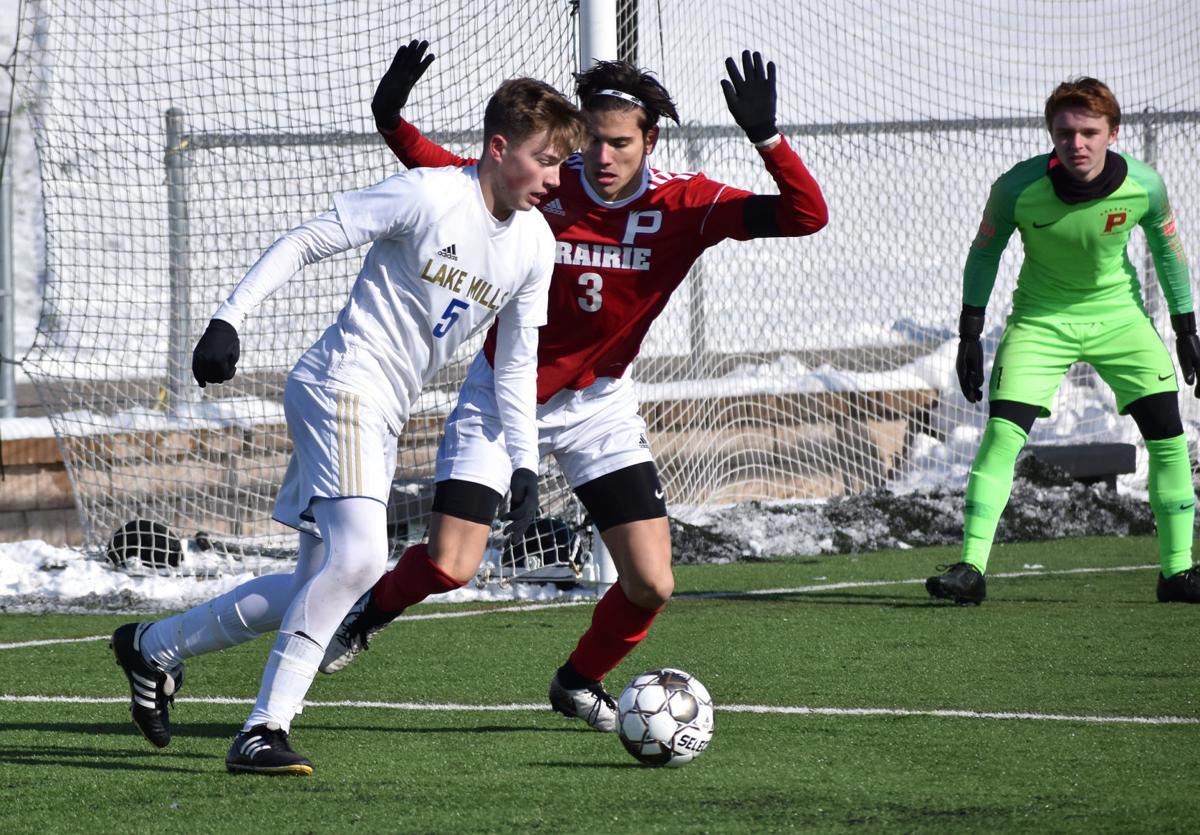 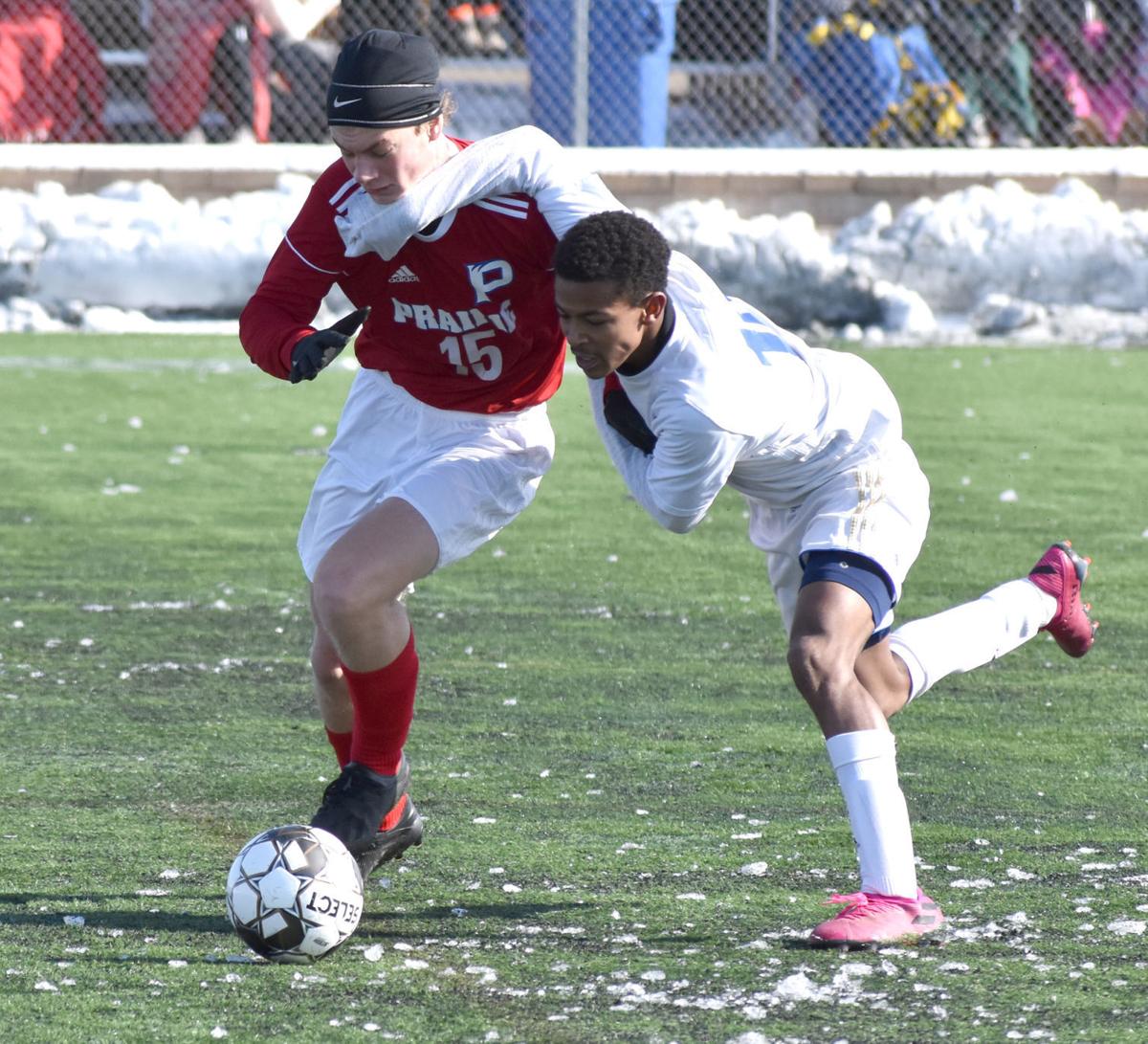 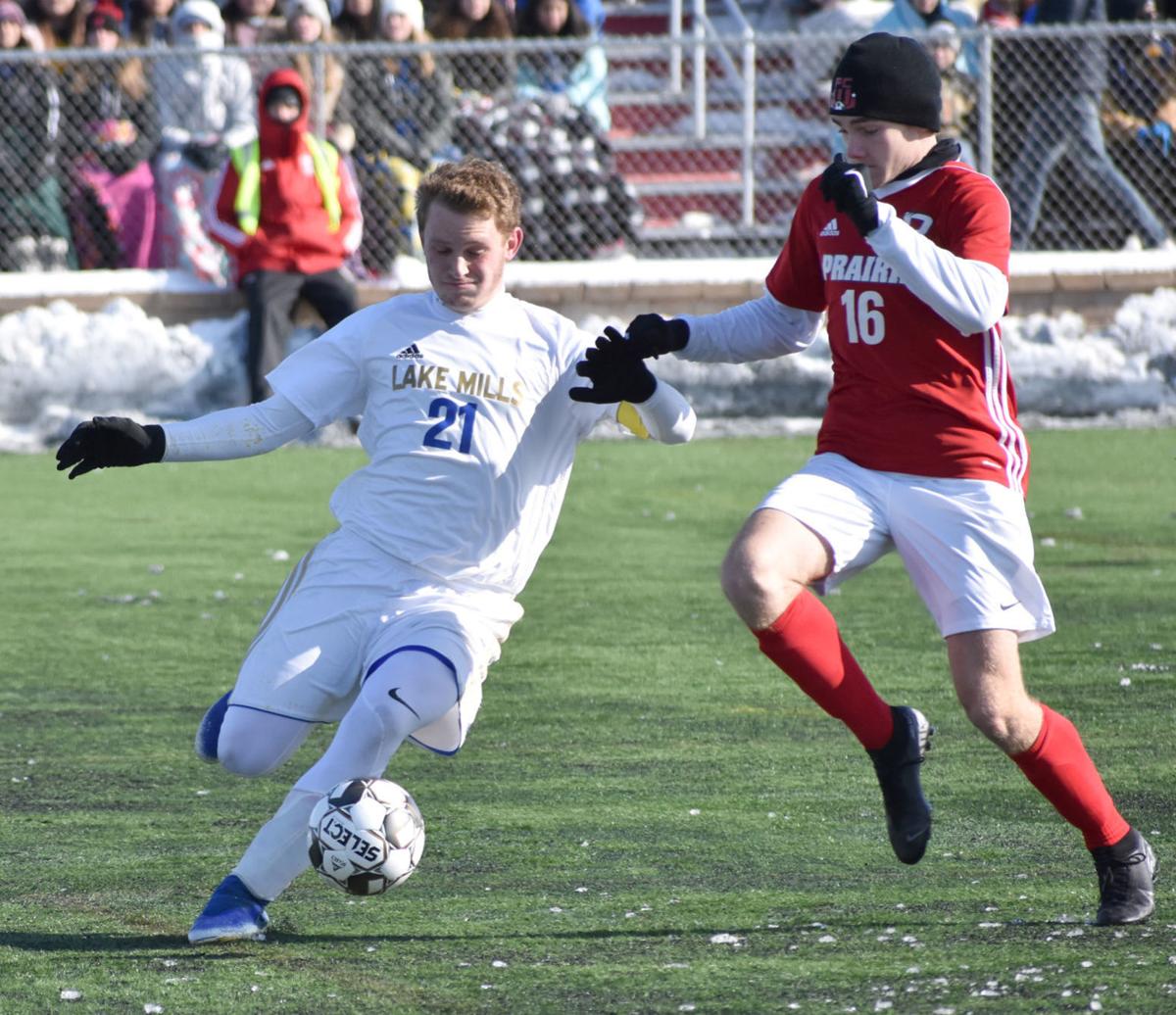 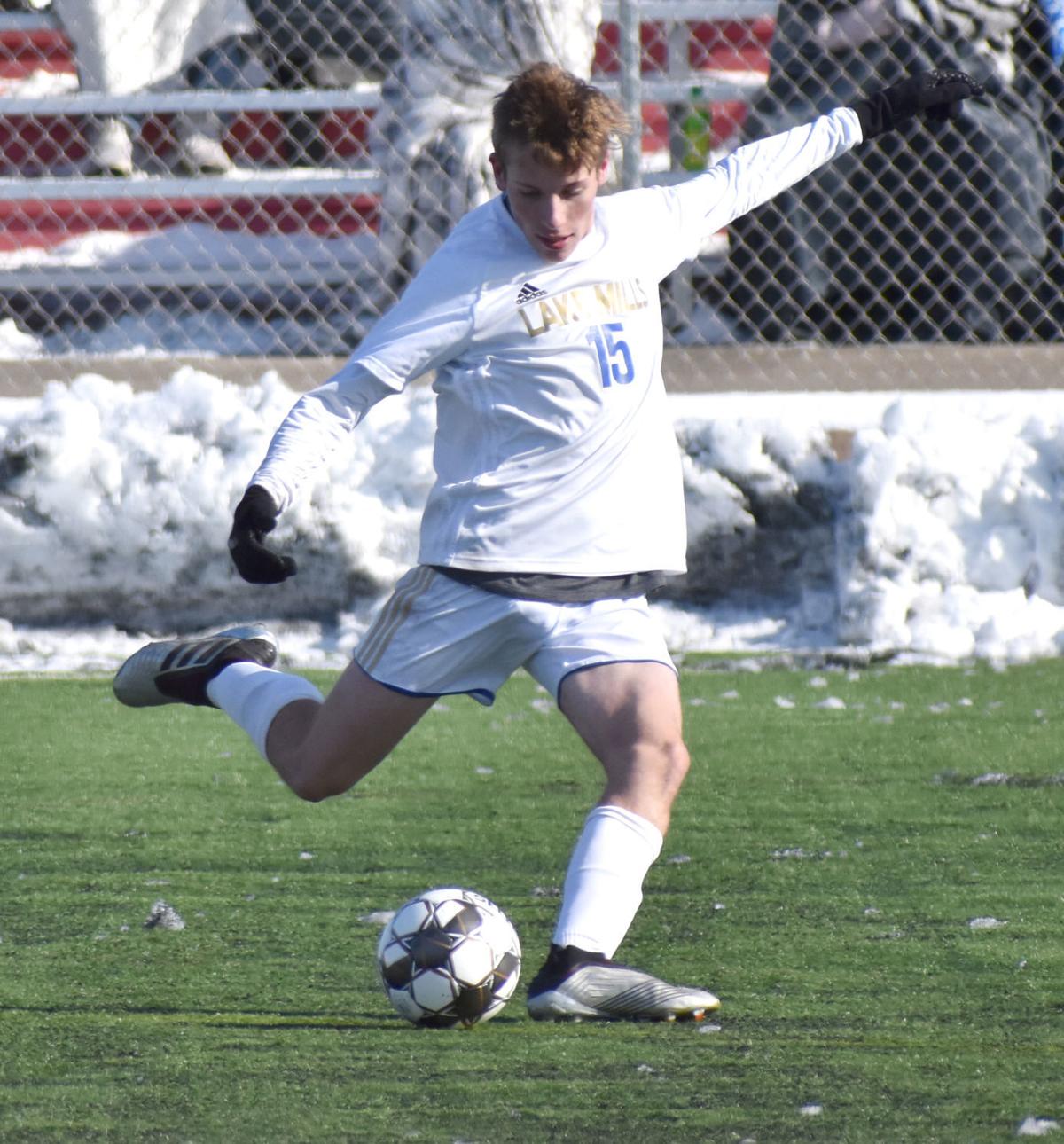 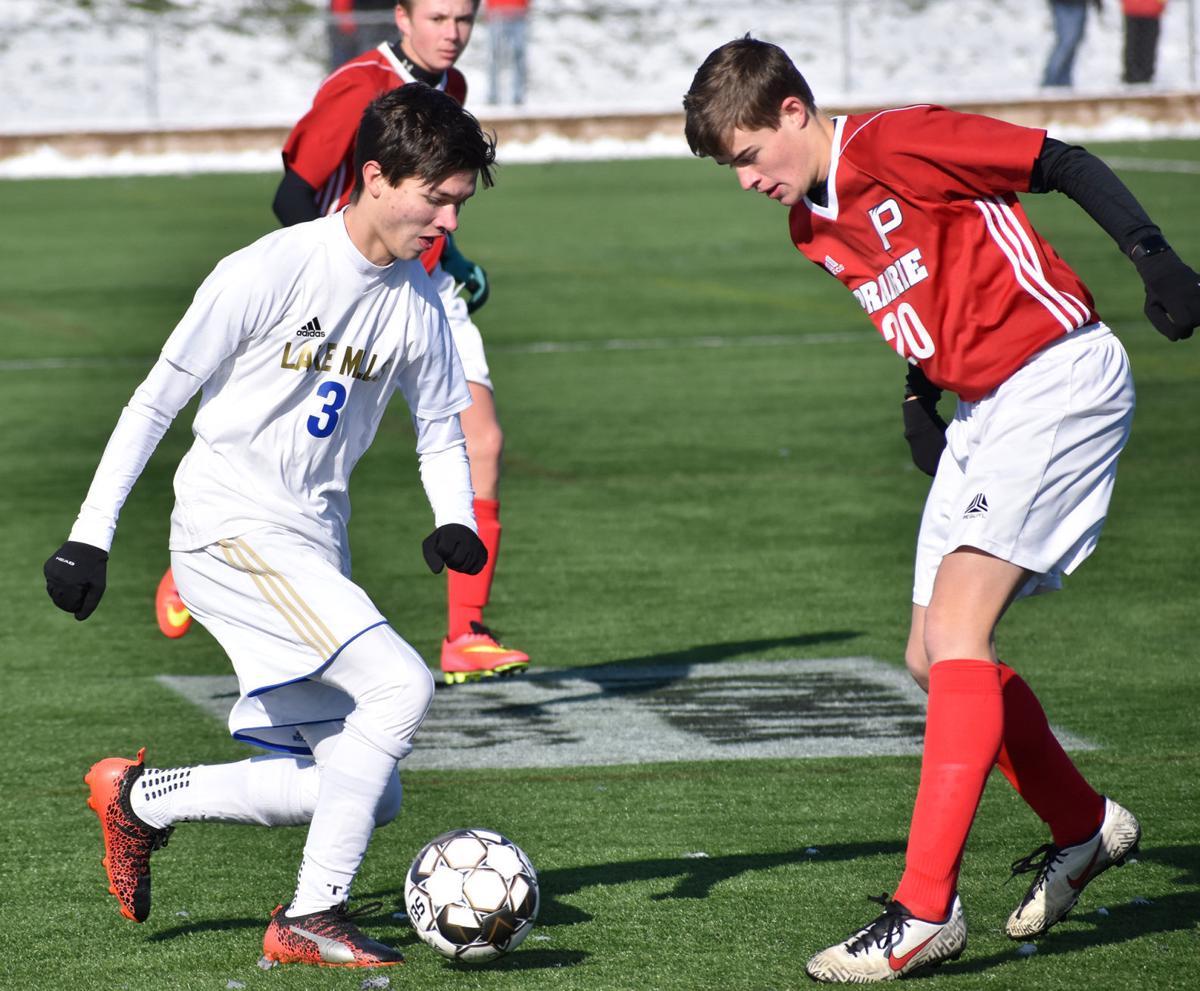 Lake Mills senior forward Aiden Klein (3) is guarded by The Prairie School's Jack Lofquist in the second half of a WIAA Division 4 state semifinal at KOHLER Engines Stadium in Milwaukee on Thursday. The L-Cats lost 8-0. 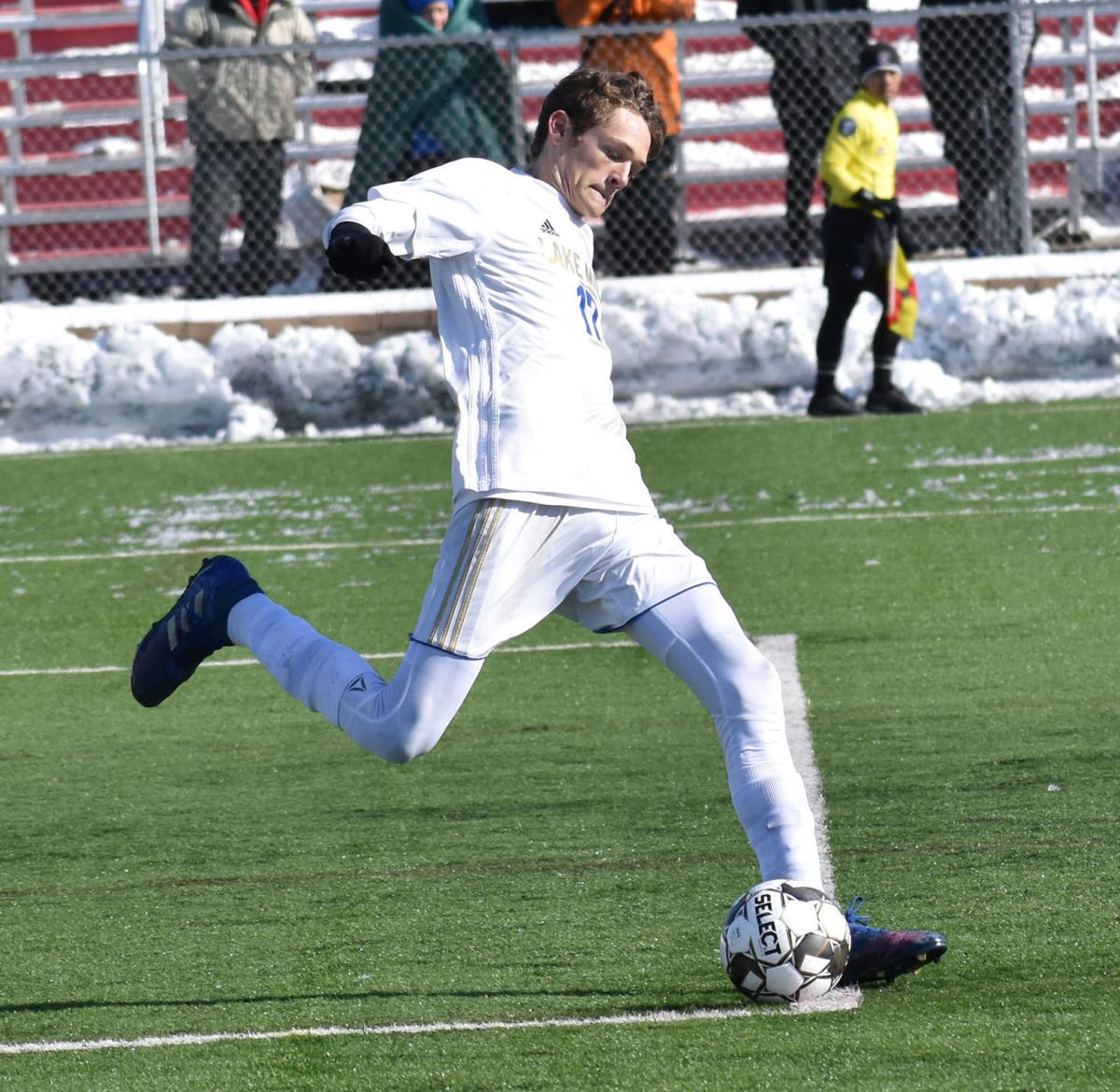 Lake Mills sophomore defenseman Lucas Hart takes a goal kick in the second half of a WIAA Division 4 state semifinal against The Prairie School at KOHLER Engines Stadium in Milwaukee on Thursday. The L-Cats lost 8-0. 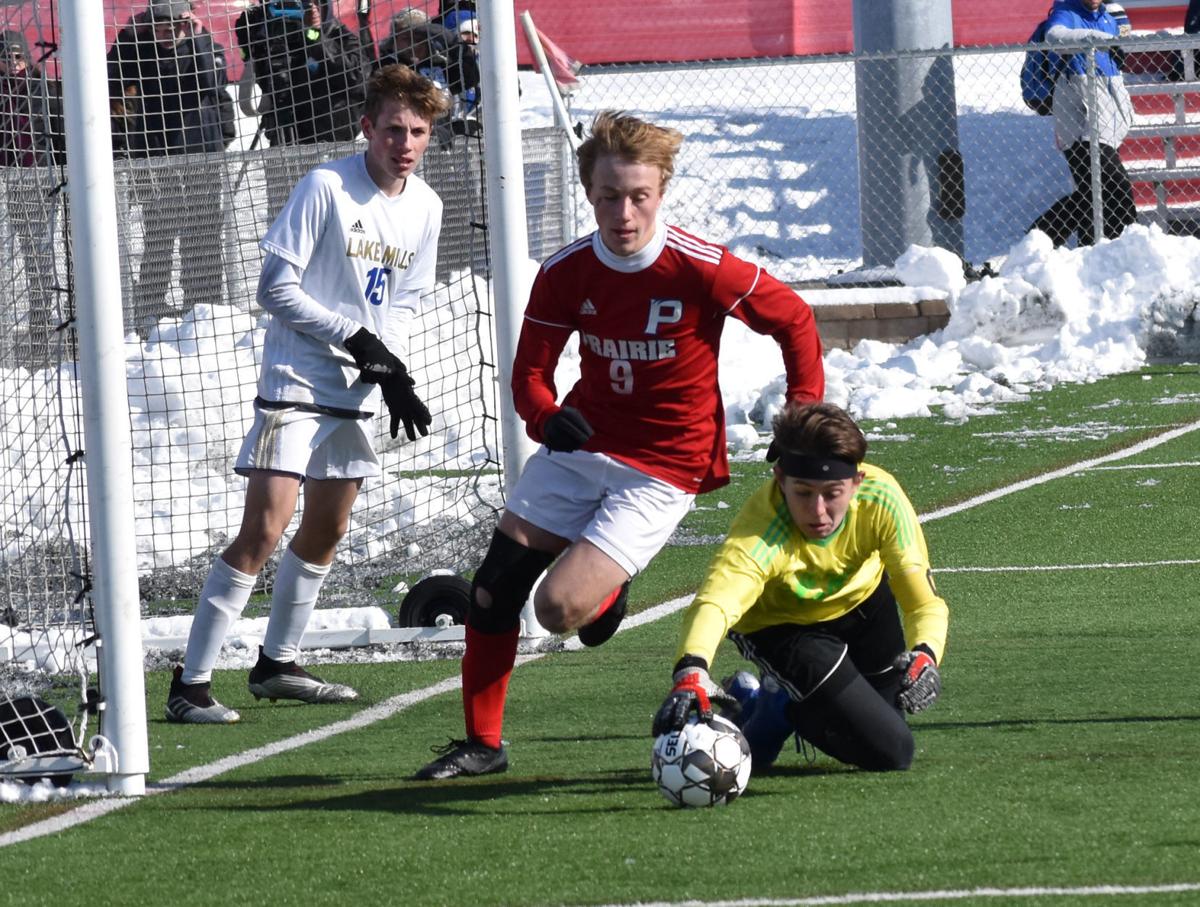 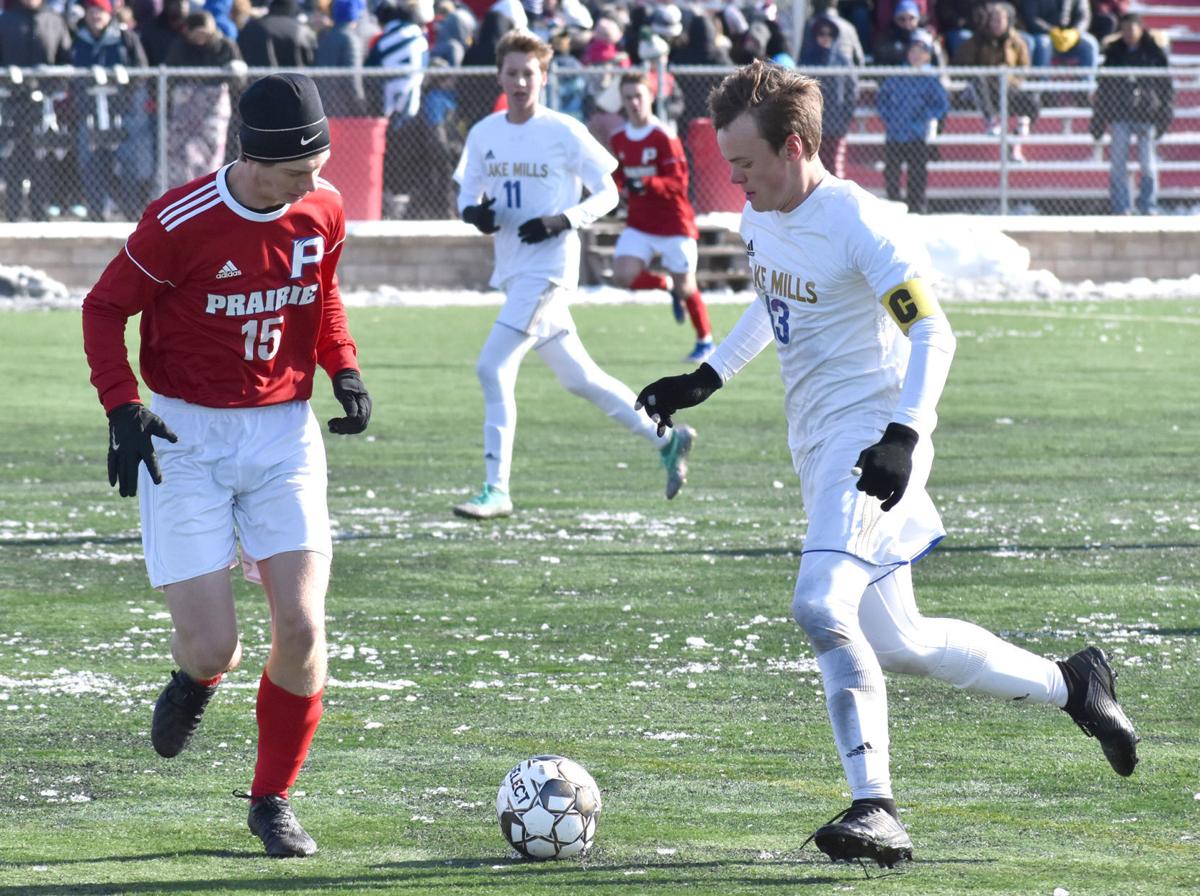 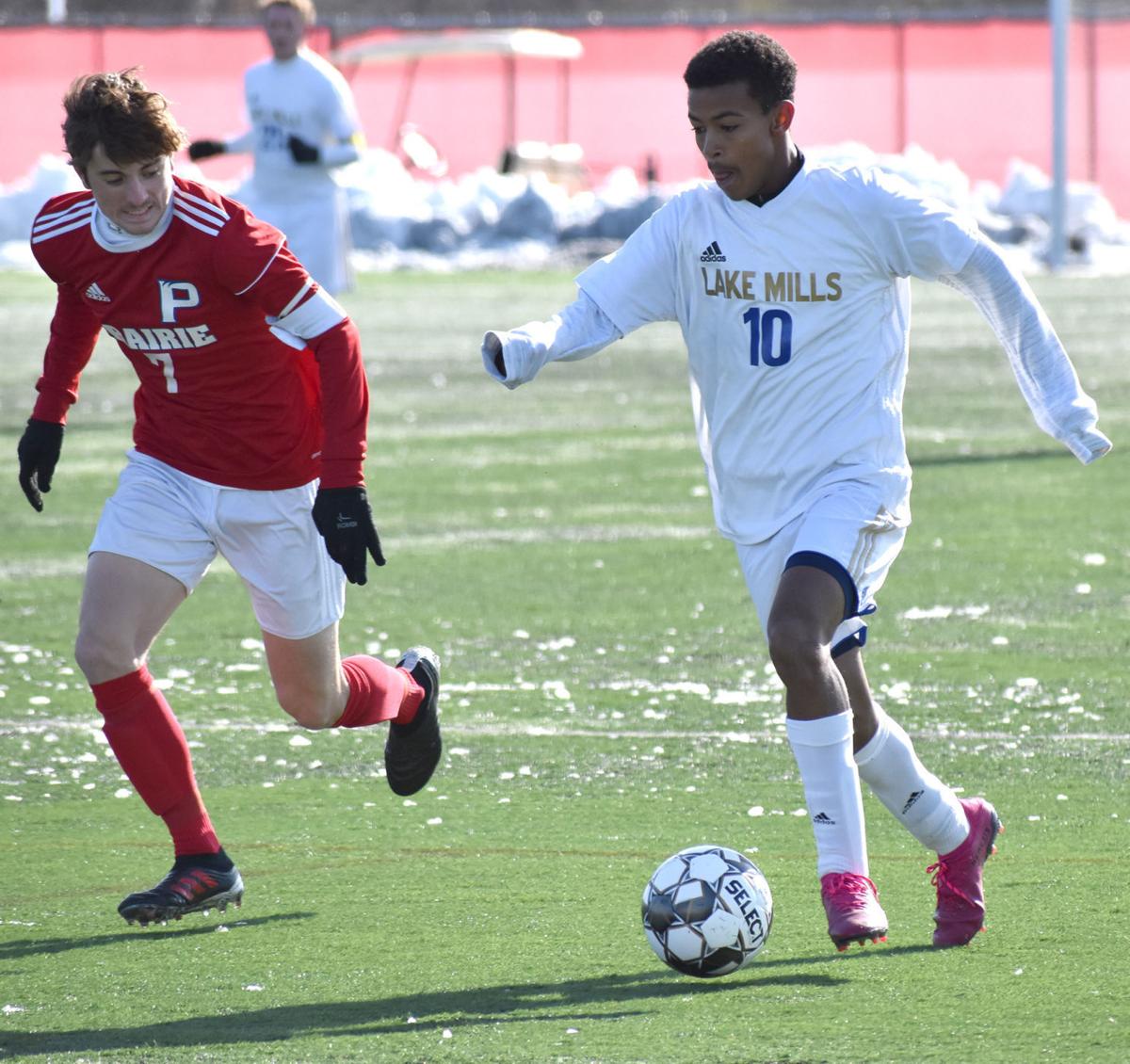 Lake Mills senior forward Aiden Klein (3) is guarded by The Prairie School's Jack Lofquist in the second half of a WIAA Division 4 state semifinal at KOHLER Engines Stadium in Milwaukee on Thursday. The L-Cats lost 8-0.

Lake Mills sophomore defenseman Lucas Hart takes a goal kick in the second half of a WIAA Division 4 state semifinal against The Prairie School at KOHLER Engines Stadium in Milwaukee on Thursday. The L-Cats lost 8-0.

MILWAUKEE — The dream season culminated on a pitch few get to play on.

The Lake Mills L-Cats, playing in their first state championship, lost to The Prairie School 8-0 in a WIAA Division 4 state semifinal at KOHLER Engines Stadium in Milwaukee on Thursday.

“It was absolutely terrific. This is the first time we’ve gone to state, to be a part of this team is an unbelievable experience,” sophomore midfielder Isaac Lambert said. “You could never explain it any more than that.”

Fourth-seeded Lake Mills’ eight seniors, including two of the team’s three captains in goalie Connor Dean and defenseman Camden Schultz, helped pave the way for a playoff run that included a shootout victory over Lake Country Lutheran in the sectional finals and a 2-1 home win over Wisconsin Heights/Barneveld in the sectional semifinals.

“I couldn’t have asked for a better group of seniors to bring leadership to the team,” first-year Lake Mills boys soccer coach Tony Cooke said. “In Connor and Camden, we have two senior captains. The rest of the seniors do a good job of setting an example of work ethic. The team as a whole came together as the season went on. They stopped playing for themselves and started playing for each other. That helps with team morale and having success. Brayden Ciesiolka is our sophomore captain. Those (captains) set the tone for the rest of the team.”

The top-seeded Hawks (17-1-5) scored in the 11th minute on an own goal that Schultz wasn’t able to clear. Two minutes later, senior forward Max Yde made it 2-0 after corralling his own rebound, sending it past Dean.

Junior forward John Wilke, the L-Cat goal-scoring leader with 32, had four shots on goal in the first half and took two 26th-minute corner kicks. Hawk sophomore goalie Devin Stoltenberg barely stopped Wilke’s shot in the 25th minute after a full-out extension to bat the try away.

“We had a bunch of really good looks in the first half,” Cooke said. “Going into half down 0-2, The Prairie School probably thought they would go into half up 6-0 (after the first two goals). For us to be only down two was a good feeling. The bigger issue was less so their defense stopping us as it was their offense overpowering us. (Stoltenberg) had a good save on one of John’s shots. We were just being overrun by their attackers, we couldn’t get a good press on ourselves. They are a big, fast team. We are fast too but not that physical. They did a good job making sure we stayed off the board and we did a good job trying to get on the board.”

After nearly 15 minutes of scoreless soccer, the floodgates opened for The Prairie School. The Hawks scored six times in a 14-minute span, including two goals each by Yde, who finished with a hat trick, and senior midfielder Jason Frosch, for the final margin.

“It’s hard for the seniors knowing it’s the end for them,” Cooke said. “They also acknowledge we have played 26 matches this year and have made it farther in the season then any Lake Mills team ever has. It was bitter sweet, but everyone was very happy with the season as a whole.”

Schultz will remember the selfless brand of soccer that got this team to the biggest stage.

The L-Cats tied for third in the Capitol Conference with a 6-3 record before topping Campbellsport 6-0 to open the playoffs. In the regional finals, the L-Cats took down Mayville 8-1. As the season progressed, strong bonds only got better.

“It just seems so right with us. It always seemed right — our relationships as a team,” Lambert said. “We work as a team and we’re always there to play.”

The Prairie School faces second-seeded Sturgeon Bay, a team coached by Lake Mills alum Todd Maas, in the finals on Saturday. The Clippers beat Northland Pines 5-1 in the other semifinal.

Caden Holum’s 60th-minute goal made the Hawks lead by three, a tough deficit to overcome regardless of the opponent.

“They have a tremendous amount of talent. The Prairie School plays on a different level,” said Cooke, who was appreciative of the support his team received from Capitol Conference coaches. “That was evident when they started ringing them up. They had nice passes and slotted passes behind our defenders. Once you are down 3-0 in a soccer match, things look like an impossible climb, even for a team like ours that knows we can come back. The finality of the situation overcame some of our guys, we started to get down. We did a good job this year of not getting down, but when you are facing a team you feel like you are punching out of your weight class against, it’s hard to stay positive.”

L-Cat nation came out in droves, despite the game starting at 11 a.m.

Dean stopped nine shots while Stoltenberg made four saves as the L-Cats got outshot 26-7.

Lake Mills (14-9-3) sophomore defenseman Sam Wolff was shown a 41st-minute yellow card while The Prairie School’s Nicholas Hawkins got a yellow in the 51st minute.

This one is going to sting for a little bit, but the memories of the campaign will last for a lifetime.

“Absolutely, unquestionably a successful season, one that anyone involved with the team will never forget,” Cooke said.

“I’m glad that my final season could be the first time in history that the Lake Mills L-Cats boys soccer team has gone to state and that it could be with this team that did it,” Schultz said. “I couldn’t ask for a better senior year.”