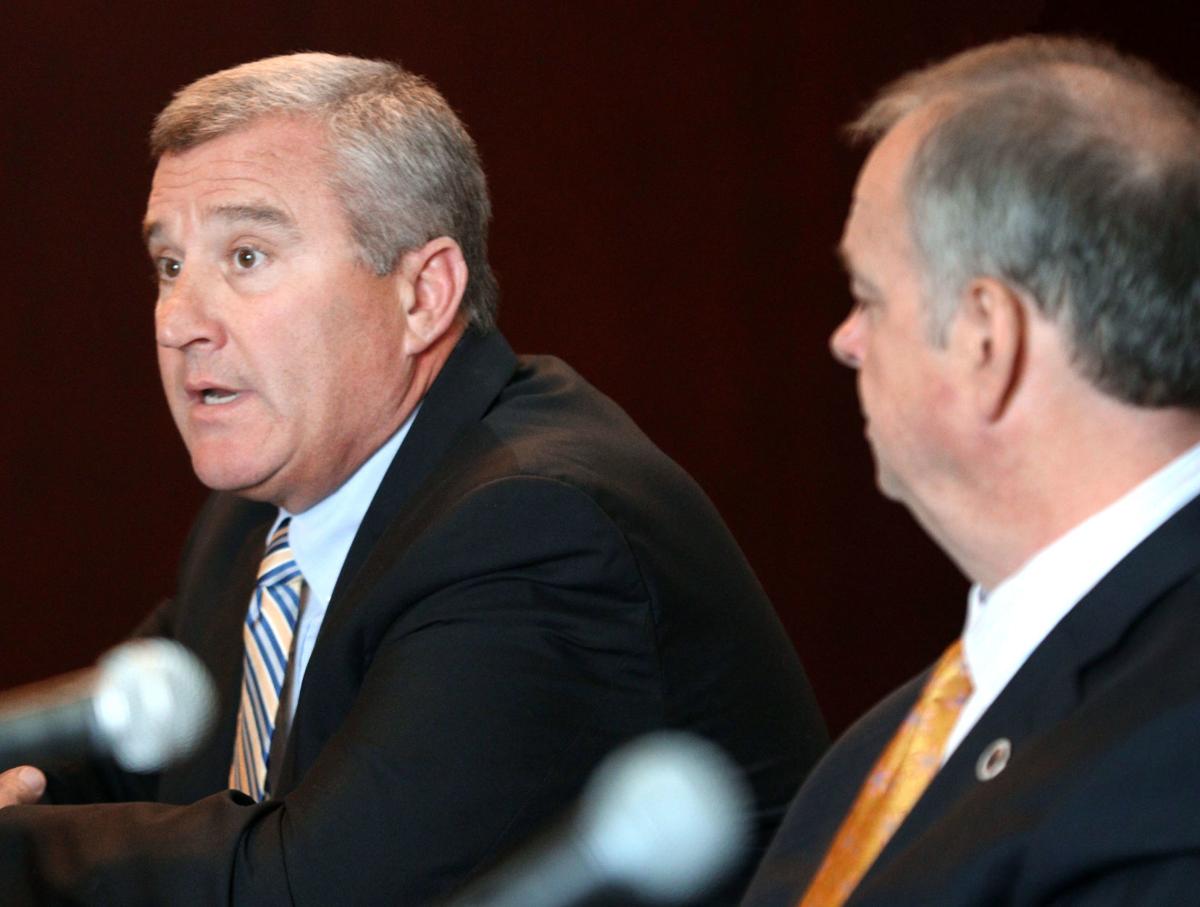 Dan Schumacher, director of athletics, left, and Chancellor James Schmidt speak at a press conference in the Davies Center announcing the additions of baseball, men’s soccer and women’s lacrosse on Monday. View more photos at LeaderTelegramPhotos.com. 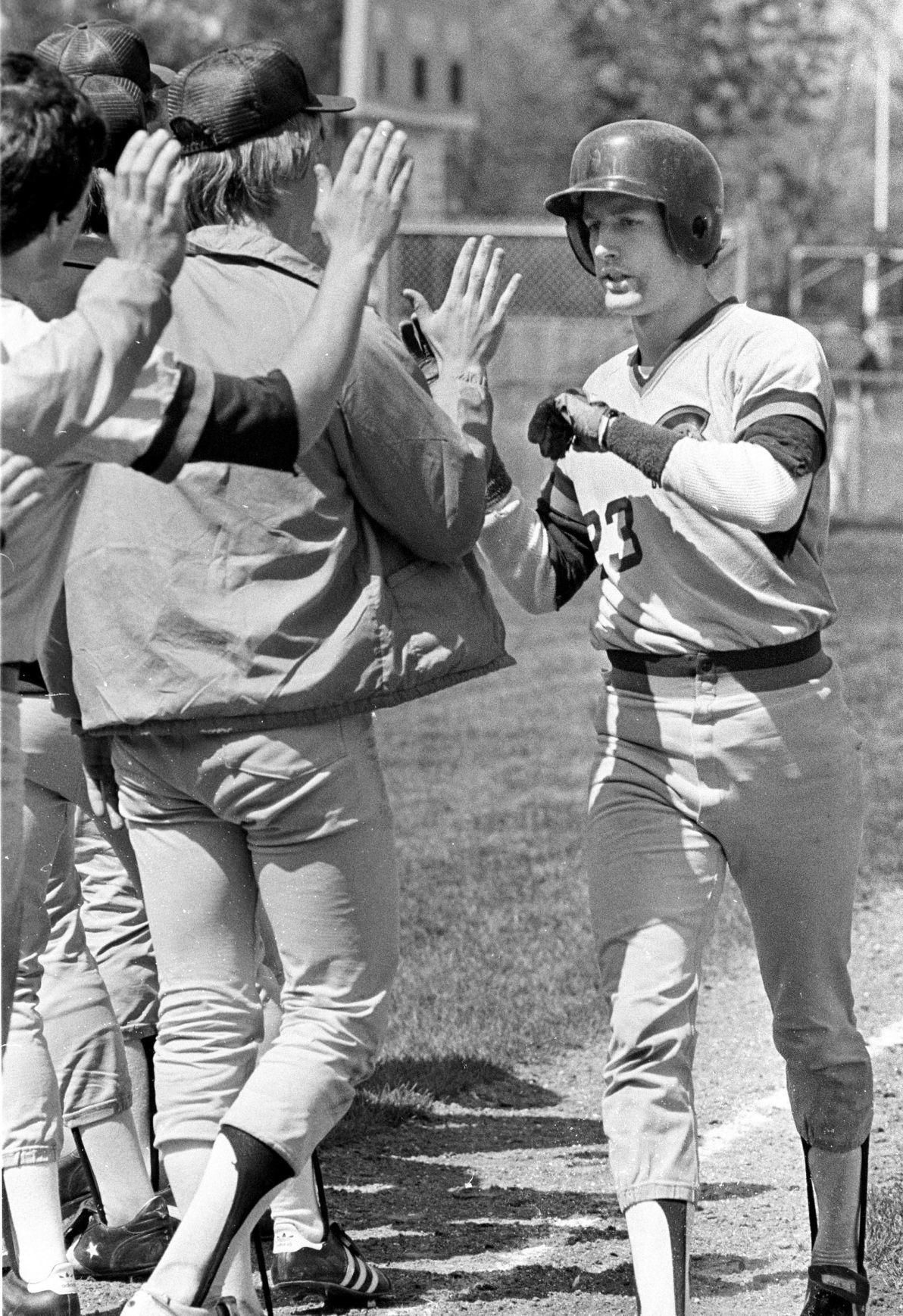 UW-Eau Claire celebrates in a game against UW-Stout in 1983.

Dan Schumacher, director of athletics, left, and Chancellor James Schmidt speak at a press conference in the Davies Center announcing the additions of baseball, men’s soccer and women’s lacrosse on Monday. View more photos at LeaderTelegramPhotos.com.

UW-Eau Claire celebrates in a game against UW-Stout in 1983.

EAU CLAIRE — University of Wisconsin-Eau Claire Chancellor James Schmidt said he started hearing from vocal baseball alums before he even officially took his position at the school.

“It was released in the newspapers that I would be recommended by the Board of Regents for this position,” Schmidt said. “The next day in my office at Winona (Minn.), I had a call from some of our baseball alums who were coming down to meet with me.”

Six years later, those alums and many others can finally breathe a sigh of relief.

UW-Eau Claire officially announced the addition of three new athletic programs on Monday in the Davies Center, with baseball set to return next spring after a hiatus lasting over two decades. Also joining the fold next year is women’s lacrosse, with men’s soccer setting up shop in the fall of 2021.

The new sports offerings are a piece in the university’s overall enrollment package Schmidt called “Investing in our Future.” UW-Eau Claire is also planning additions to academic programs and an expansion of the Blugold Marching Band from 475 to 500 members.

UW-Eau Claire projects an addition of 94 student athletes — 42 for baseball, 24 for women’s lacrosse and 28 for men’s soccer. Schmidt said the overall goal of the package is to increase campus enrollment by 405 students over a three-year period starting next fall.

“Blugold student-athletes see higher retention and graduation rates than non-athletes,” Schmidt said. “And frankly, the costs of a Division III sports program are incredibly low by comparison to our sister institutions at DI and DII.”

News of an athletic department expansion was first revealed by Schmidt in an interview with the Leader-Telegram on Oct. 8, but the plan was still pending approval at the time. An expected downturn in the college-going population over the next decade is forcing UW-Eau Claire and schools across the country to get creative to stay viable.

“In 2025 demographics shift significantly in the Upper Midwest,” Schmidt said earlier this month. “We want to make sure that we’re competitive and the school’s the right size and frankly be in the strongest spot possible when competition gets to be a little bit more.”

“We have the largest athletic department in the state, if not the Midwest, with over 820 bodies,” athletic director Dan Schumacher said.

Schumacher said the full array of NCAA-sponsored sports were considered. The final trio were chosen based on interest from the student body, their fit with the region and a available paths to NCAA tournament qualification.

Eau Claire’s rich baseball history brought the sport to the forefront of any expansion discussion. Schumacher has voiced his disbelief with the absence of the sport ever since word of its considered return was first shared by Schmidt.

The UW-Eau Claire varsity baseball program was discontinued following the 1994-95 academic year due to Title IX issues. Since then, the university’s participation has been limited to the club level.

“I’m tired of sending five, six, eight guys a year to other universities rather than staying here and playing in our hometown,” said Mark Faanes, head coach of the Eau Claire Pizza Hut/Post 53 Legion program. “I’m looking forward to sending some of our guys to play for UW-Eau Claire.”

“We have such great baseball players, high school players that are looking to play college baseball,” Eau Claire Express manager Dale Varsho said. “What a great opportunity for them to come stay at home.”

Schumacher said his intention is for baseball to return to Carson Park, but that has not been finalized yet. Schmidt said early in October that a group of alums had pledged half a million dollars to help get the program jump-started and for facility upgrades.

Men’s soccer and women’s lacrosse can play on the newly renovated Simpson Field on campus.

Both women’s lacrosse and men’s soccer are expected to diversify the athletic program racially and geographically. Schmidt said that was a major driver for soccer, which was on the bubble more than the other two sports.

“It is the world’s most popular sport,” Schmidt said. “It’s been very popular among many Latino young men as well as many of our Hmong students have been very active. We haven’t seen as high a level of participation from those students in some of our other sports. I believe it will be one of our more diverse programs.”

The sport of lacrosse is most popular on the East Coast, particularly in New England, New York, Maryland, Virginia and the Carolinas, but has seen growth throughout the rest of the country as well. Fourteen states had at least 10,000 youth participants in 2018 according to U.S. Lacrosse’s annual participation report.

“Women’s lacrosse is the fastest growing women’s NCAA sport right now in all three divisions,” Schumacher said. “With women’s lacrosse, the state of Illinois and the state of Minnesota now recognize them as state championships. That allows us to go in there and now we’ll have a good feeder situation in terms of recruiting, as well as the East Coast.”

Baseball is the only sport of the three currently sponsored by the WIAC. With the addition of the Blugolds, the conference now has the eight teams required for an automatic qualifier to the NCAA tournament. UW-EC joins six other full-time members — UW-Whitewater, UW-La Crosse, UW-Platteville, UW-Stout, UW-Oshkosh and UW-Stevens Point — as well as affiliate member Finlandia.

Only two other WIAC schools have men’s soccer and women’s lacrosse — UW-Platteville and UW-Whitewater for soccer and UW-La Crosse and UW-River Falls for lacrosse. Schumacher said conversations to find the two sports a home are already underway, with lacrosse discussions beginning about a year ago.